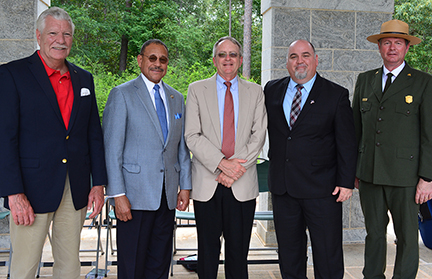 ANDERSONVILLE — Amid a backdrop of hundreds of American flags flying over Andersonville National Cemetery, citizens from near and far gathered to pay tribute to the nation’s fallen heroes at the annual Memorial Day observance Sunday afternoon.
Fred Boyles, former superintendent at Andersonville and Jimmy Carter National Historic Sites, who has given a life of service to this country, delivered the keynote address, stepping in for Doug Livermore of the Office of the Under Secretary of Defense who was scheduled to speak but was deployed to active military duty in recent days.
Boyles, introduced by 2nd District Congressman Sanford Bishop, D-Columbus, spoke eloquently about the significance of Memorial Day and reflected on how it has personally affected him since childhood.
“I remember well when as a young boy my dad came home from work one day and told our family that the son of his co-worker had been killed in Vietnam,” said Boyles, speaking from the Rostrum to the modest but enthusiastic crowd seated under a large canvas tent due to the threat of stormy weather.
“This was the first time that I came to realize that war was more than glorious cavalry charges and great victories,” Boyles continued. 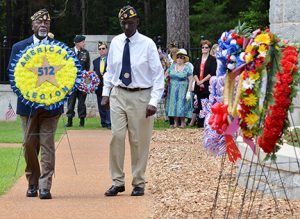 “War meant that soldiers, and in the case of the story I am sharing was a Marine, would die. The Marine’s name was Coley. He was a few years older than my brother and his family attended our church. At the time of his death I was in the fifth grade. What I remembered most was my dad’s response to this news and its aftermath.”
Boyles reminded everyone the National Cemetery is a hallowed burial site with graves of military service members who gave their lives for everyone and the nation, the majority being those who died at Camp Sumter who were held POWs under terrible conditions during the Civil War.
He also recalled what U.S. Sen. John McCain, R-Arizona, said when he spoke at the dedication of the National POW Museum 20 years ago. He remembered McCain didn’t dwell on his experience as a POW but that of a colleague, Air Force Lt. Lance Sijan who never gave his torturers the information they wanted despite his horrendous mistreatment. “Sen. McCain told how Sijan’s story had always been an inspiration to him and others who remained captives for many years. 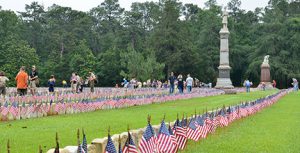 Members of the Boy Scouts of America place small American flags on the gravesites at Andersonville National Cemetery on patriotic holidays such as Memorial Day and Veterans Day.

“We should never lose sight of the Andersonville prisoners who are in our midst,” said Boyles. “Their sacrifice is our legacy as an American. It is not enough to honor what they did; it is also imperative for us to live up to the ideals of our nation they serve.”
His voice broke when he spoke about his parents buried nearby. “My dad would be the first to remind us that he was one of the lucky ones. He was an Army soldier who served in World War II — the 758th Field Artillery and fought in the Battle of the Bulge, but he came home to live a full life. However, he knew people who never made it home. They are the people that we are here to remember today.”
Everyone listened intently when Boyles mentioned Sumter County war hero SFC Victor Anderson whose is buried at Andersonville, and another Sumter hero, Luther Story, who was killed in the heat of combat on Sept. 1, 1950, during the early days of the Korean Conflict. Story’s body was never recovered and a memorial marker is placed at Andersonville. “Two years ago, I visited the United Nations Cemetery in Busan, Korea,” said Boyles. “There are several U.S. unknown gravesites there; I wonder if Luther Story is one.”
Boyles concluded by saying the story about the Marine mentioned earlier who died in Vietnam touched him in a way he would always remember
“His death in the line of duty was a lesson for me — the true meaning of Memorial Day,” said Boyles. “God bless this special place and God bless all you who care about it and may God bless the United States.”
T 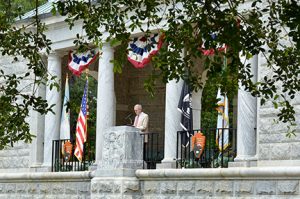 he annual observance began with patriotic musical selections played by the U.S. Army Maneuver Center of Excellence Band from Fort Benning. Charles Sellars, superintendent of Andersonville National Historic Site, warmly welcomed everyone and then all stood to salute the American flag advanced by the 78th Air Base Wing Honor Guard of Warner Robins and then joined in unison to repeat the Pledge of Allegiance and sing the National Anthem.
Jim Covington, president of the Friends of Andersonville, the organization that supports the National Historic Site, paid tribute to the men and women in the military who served in all American wars to ensure the freedoms we enjoy today.
The program also included the laying of patriotic wreaths presented by patriotic and service organizations from the area including several from Americus: the Council of Safety Chapter Daughters of the American Revolution presented by Leila Case, regent, and Nancy Hayes, immediate past regent; Friends of Andersonville, presented by Melanie Grace; and Post 2 American Legion presented by Albert Foster and A.J. Root.
The Rev. Kevin Martin of Heritage Baptist Church, Reynolds, gave the invocation and benediction.
The solemn refrains of “Taps” echoed across the rolling green hillside and the program closed with the band playing “Mansions of the Lord.”