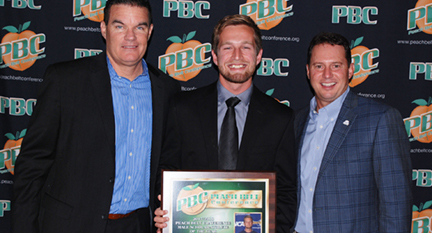 HILTON HEAD, SC – Georgia Southwestern State University Men’s soccer standout Silvio Polly was named the 2017-18 Peach Belt Conference Male Scholar-Athlete of the Year on Tuesday evening, May 29, at the PBC’s annual awards dinner. The Scholar-Athlete Award is the highest individual honor given by the PBC to a student-athlete during the year, and is selected by the league’s faculty athletic representatives.

Polly, a native of Rio De Janeiro, Brazil, graduated this Spring from GSW with a degree in Exercise Science and Wellness, while earning a 3.90 GPA. Polly also received the Dr. Richard Litwhiler Award for Exercise Science and Wellness. Polly is a three-time PBC Presidential Honor Roll member, including twice as a Gold Scholar. He was also named to the GSW President’s List and is a member of the GSW Honor Society.

Polly is the first men’s soccer player to be a two-time All-Conference selection. He appeared in all 16 matches this season for the Hurricanes, and started 15 of them. Polly led the team in scoring with eight goals, including game-winning goals against Milligan College and Concordia College (AL). Polly was responsible for 36 percent of the Hurricanes’ scoring in 2017. He was tied for fifth in the PBC with eight goals and fifth in the conference with 19 points. Polly is GSW’s all-time leading scorer with 23 goals and the all-time points leader with 56.

Polly is the second Hurricane to be honored with the PBC Male Scholar-Athlete Award of the Year and the second in a row. Nick Ward won it in 2017.