Wes Beamon sworn in as attorney 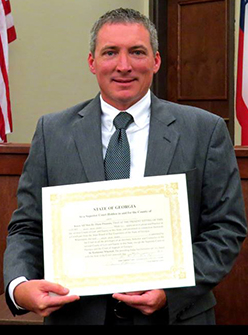 AMERICUS — Americus native, Wes Beamon, was sworn in as an attorney by Honorable Judge Rucker Smith on May 24. Beamon currently lives in Schley County. He is a graduate of Sumter County Comprehensive High School. He has earned a degree in health studies and fire science administration. He received his law degree from Mercer University School of Law. On May 18, he received the news that he had passed the Georgia Bar Examination.
Beamon has served the local community as a firefighter and paramedic since 1996. He started his career with the City of Americus as a firefighter. He was a captain with the Americus Fire and Emergency Services when he resigned to attend law school. He is also a veteran of the U.S. Marine Corps. He served in the reserves from 1995 to 2001, reaching the rank of sergeant. His service has been given to other communities over the years as well. He worked for Terrell County Emergency Medical Services and Macon County Emergency Medical Services as a paramedic during his public safety career.
Still having a desire to be part of the fire service, Beamon joined the Schley County Fire and Emergency Services as a volunteer firefighter and works part-time as a paramedic there as well. While studying for the bar exam he started working full-time with Sumter County Fire & Rescue. Beamon plans to continue working as a firefighter and paramedic as long as his legal career will allow.
During law school Beamon became a registered neutral and started conducting mediations. Since then he has conducted over 50 mediations ranging from divorce to multi-million-dollar disputes. Mediations are a way for people to settle disputes with or without an attorney and without going to trial. Beamon also has been appointed a magistrate judge in Schley County by Chief Magistrate Judge Way. Beamon works with Way to ensure the county always has a magistrate judge available.
Beamon and his wife purchased a house located in the 500 block of Millard Fuller Boulevard in Americus. They have been working on the house for the past two years. Their desire is to make the house the home of Beamon Law once it is complete. The house is rich in history. It was built in the 180’s by Thomas Clubb Sullivan who was the second mayor of the city and, like Beamon, an attorney. In fact, Beamon found a letter in the wall of the home signed by Sullivan as “Att at Law.” Sullivan died in 1878, at the age of 74.
Once the 3,200-square-foot office is complete, it will have six offices, three restrooms, one full bathroom, a kitchen, two conference rooms, receptionist area, waiting area, library, and file room. The Beamons are not sure when the office will be complete as they are the only ones working on the project. Their family and friends drop in sometime to help work on the office. The Beamons both work full-time and have five children that keep them busy. Until the office is ready Beamon will work from home.
The home was bought from William (Bill) Herron whose family owned the home for 97 years. Herron’s desire was to keep the home but he finally decided to part with it once Beamon expressed his desire to rebuild the home giving the house the love and passion such a home deserves.
Beamon contributes his success to several things. Being raised by hardworking parents who taught him how to work is the number one key to his success. His parents are Allen and Nancy Beamon of Leesburg and Brenda and Dennis Davis (deceased) of Americus. Beamon also links his success to being a Marine and working for Peacock Towing under the scrupulous direction of the late Roy “Cash” Peacock who taught him countless life lessons that he still holds dear to his heart. One great lesson was to do things his way or it was the highway. This, to Beamon, is a lesson countless employees need to learn today. Peacock also taught him that the public always has an eye on you and you should care what they see.
Beamon’s family stepped up to plate to help him through law school and bar prep over the past five years. His mother and stepfather would watch the boys when he studied in Americus. Likewise, his mother in-law Janet Disney quit her job to stay home and help watch their boys so he could attend law school.
Finally, Beamon is well aware that he could not have made it without the love and support of his wife Deanna and his five kids Taylor, Thad, Hannah, Kyler, and Brayden. His wife not only worked full-time, she also managed the household while Beamon was away studying. Beamon expresses how blessed he is to have a wife willing and able to allow him the time needed to study. Each of his kids have given him words of encouragement throughout his studies. Each child also attended a few classes with him at Mercer University to see firsthand what law school is like.
Beamon is honored to be a part of this community and looks forward to serving it in a new capacity. He is grateful for the community and the support, prayers, and words of encouragement it has given over the past five years.
Beamon’s final words of encouragement are to “never give up, keep moving forward, and know that dreams can only come true if you go after them.”