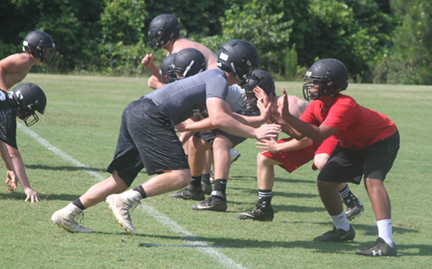 Schley County about to practice an offensive play during Summer workouts. Photo by Ken Gustafson

ELLAVILLE – On Tuesday morning, June 5, the Schley County football team began preparations to do something that has never been done in Schley County history: win a region championship.

After morning weight lifting at around 8:30 a.m. the Wildcats took the field for drills. They worked on running and passing plays from the line of scrimmage. After that was done, then came conditioning, perhaps the toughest part of the whole process: running gassers, or wind sprints.

“It’s easy to be soft, stay home and eat twinkies,” Schley County Head Coach Darren Alford yelled as the guys ran sprints. Alford and the rest of the coaches exhorted their players to fight through the fatigue. “No walking! We don’t walk on this football field,” Alford yelled as some guys slowed down on the sprints.

Tuesday, June 5, was the first day of Summer workouts for Schley County. Overall, Coach Alford is pleased with the effort and morale of his club. “We had a good day today,” Alford said. “I thought our kids came out with some good energy this morning. We worked really hard in the weight room. There are a couple of guys on vacation that need to be here, but it’s that time of the year when you have to let families do what families do right now. We’ll have everybody back here soon. When we get everybody here, I’ll feel a lot better about our practice situation. We should have everybody here early next week.” Alford went on to say that they come out every day in the Summer and do agility drills before practice time. After practice time comes the running. 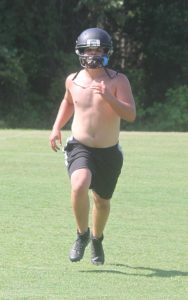 Defensive Lineman Chanler Cooper will be a senior in the Fall. He really likes how things are going so far in the Summer workouts. He feels that his personal performance is getting better, but that he needs to get in better shape and improve his technique at his position. “I need to perform better on my technique. That’s all I know,” Cooper said.

On Thursday, June 21, Erik Soliday will bring his Tiftarea Academy squad into Ellaville to practice with Schley County. That begins at 10 a.m. On Thursday, June 28, Schley County will host a seven-on-seven Fellowship of Christian Athletes (FCA) tournament with teams such as Taylor County, Wilcox County, Chattahoochee County, Mitchell County and West Laurens. That tournament will begin at 9 a.m. 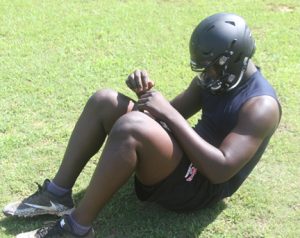 Schley County football player Zykevious Walker doing sit-ups in the middle of the first day of Summer workouts for the Wildcats.
Photo by Ken Gustafson

The Wildcats will continue their Summer workouts all the way up till Fall practice. This is the time of preparation that the Wildcats will use to try to do what has never been done in school history.