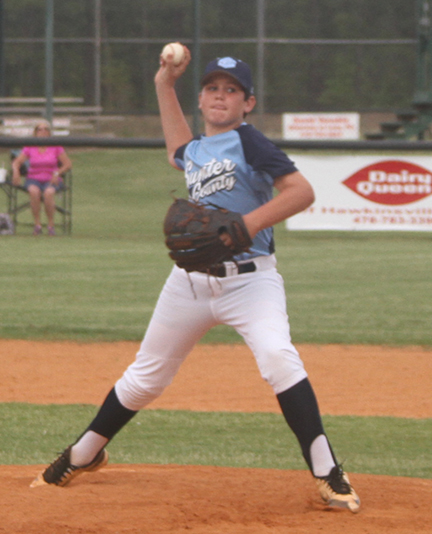 Perry Usher of the 12u Sumter County had 17 strikeouts against the Dodge County All-Stars Tuesday night, June 5, at the Hawkinsville Invitational Tournament. Photo by Ken Gustafson

“I’ve been doing pitching lessons for a while and they’ve really paid off,” Usher said. “I just try to keep throwing strikes and keep my same mechanics over and over and over.” Usher went on to say that his main two pitches are a fastball and a slider. He also says that he can throw a cutter.

Sumter County got on the board first in the top of the first. With two men on and one out, Will Godwin singled home a run to give Sumter County a 1-0 lead. 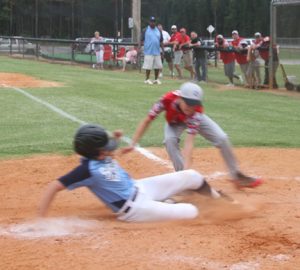 Usher began his dominating performance on the mound by striking out three of the first four batters he saw in the bottom of the first. In the top of the second inning, Anthony Tyson led off with a double. Tyson then advanced to third on a wild pitch, then scored on another wild pitch, giving Sumter County a 2-0 lead.

Usher continued to keep the Dodge County hitters at bay as he struck out the side in the bottom of the second.  Dodge County eventually got on the board in the top of the third inning. Landin Fordham led off with a single, then advanced to second when Noah Wall drew a walk. Fordham eventually scored as a result of another walk and a wild pitch. However, that would be the only run of the game for Dodge County the rest of the evening. 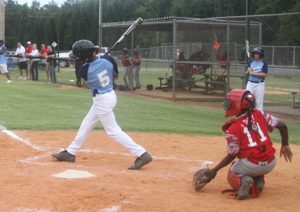 12u Sumter County All-Star centerfielder Anthony Tyson had a double and scored a run in their 6-1 win over the Dodge County All-Stars.
Photo by Ken Gustafson

Sumter County scored another run in the top of the fourth. Usher led off with a single, and eventually came around to score as a result of two passed balls and a fielder’s choice by Will Godwin. At this point, Sumter County led 3-1. However, the boys from Americus would add three more runs to their lead in the top of the sixth to secure the victory. With one out in the top of the sixth, Luke Tarrer drew a walk, then Sam Smarr struck out. Travis Pennington then singled, followed by a walk by Fisher Britt. With two men on and two out, Usher came through at the plate as he singled, driving home Tarrer and Pennington. Will Godwin drove home Britt for the final run of the game.

Usher finished the game as he had been performing all night. He struck out the side in the bottom of the sixth to secure the 6-1 victory. 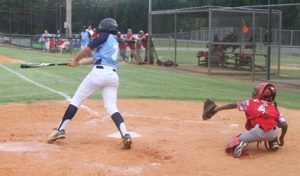 In addition to striking out 17, Perry Usher went 3-for-4 and drove in two RBIs.
Photo by Ken Gustafson

While he was happy with the victory, Sumter County Head Coach Philip Exley knows that his team was tested, which is exactly what he wanted to see happen. “I’m glad we faced a close game,” Exley said. “I think any time you face a close game, you learn as a team to deal with adversity. The boys definitely dealt with that. That was a close game right up to the last inning.”

Usher gave up only one hit the entire game. Landin Fordham got that hit in the bottom of the third inning for Dodge County.

Other Sumter County All-Star teams were in action as well in Hawkinsville. The 8u All-Stars have had an excellent tournament so far. They defeated the Dublin All-Stars on Monday, June 4, by the score of 11-9. They then followed that up with an 18-3 thrashing of the Crisp County All-Stars on Tuesday, June 5.