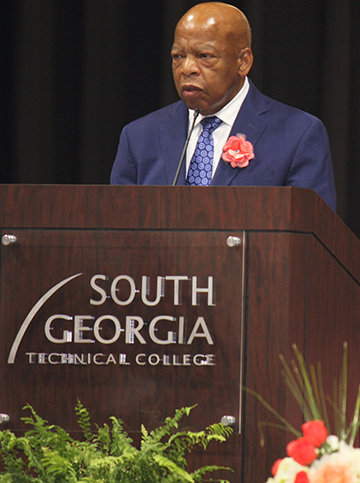 U.S. Congressman John Lewis, a veteran of the Civil Rights Movement, was keynote speaker at the annual Freedom Banquet Saturday hosted by the local chapter of the National Association for the Advancement of Colored People.

AMERICUS — One could be forgiven for mistaking the Hanger at South Georgia Technical College for a grand ball room last Saturday night. Bearing little resemblance to the gymnasium that it actually is, on occasion, the space sparkled with handsomely covered chairs boasting elaborate peach-colored bows. The large round tables provided generous space for 10 guests; at each table, in the center, stood a stunning floral arrangement that matched the silk bows. It was a setting worthy of a banquet for a prince. And a prince of the Civil Rights Movement was coming — though he was going to be late. Early in the evening, an announcement informed those waiting for dinner that Congressman John Lewis and his entourage had run into traffic problems and would be late arriving. But the party went on.
Arriving early in the evening was Congressman Lewis’ colleague, U.S. Rep. Sanford Bishop of Georgia’s 2nd District, which includes Americus (Lewis serves Georgia’s 5th District), along with several other dignitaries. The auditorium filled to capacity, and a lively band entertained with current musical hits. Then, following several introductions of local leaders, the audience stood for the band’s introduction to the hymn that everyone in the audience knew by heart: “Lift Every Voice and Sing,” James Weldon Johnson’s now-famous musical tribute to the endurance of black Americans. It was an emotional moment in an evening filled with many of them. 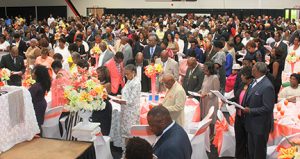 A fine dinner followed for some 400 guests, as the crowd waited to hear from the guest of honor. Arriving late, but in no way diminished, Lewis spoke with both wit and wisdom as he rallied the crowd to action — to never, ever give up, to “teach our children, all our children” to be brave, to be involved, to run for office, and, echoing a theme than has run throughout the Civil Rights Movement since the days of the Rev. Martin Luther King Jr.: “you can’t get tired.” He spoke of a forthcoming book he has written that will be out this summer. Called “Run,” the book takes up where his last book, “March,” left off. The title gives notice, and he reiterated it, that part of the aim of “Run” is to inspire this generation to get involved in the democratic process.
Lewis spoke of the Dreamers — those young people who were brought here by their parents and raised as Americans, but who are now threatened with deportation. He got the loudest applause of the evening when he said, “I’m not going to build a wall! I’m going to build bridges!”
A man who wears the scars from the civil rights battles that he endured — those lost and won —is not despairing about his country. His voice still strong and upbeat, Lewis sounds optimistic at a time when other voices cry “doom.” His remains a voice of reason, of looking forward while remembering the journey. It is little wonder that wherever he goes, he gets a standing ovation. It was no different in Americus on Saturday, June 2, as he returned to a town that had not been kind to him in his younger days, and was welcomed as a returning hero. And everyone in attendance knew that, indeed, he was a hero — and that heroes never get tired.