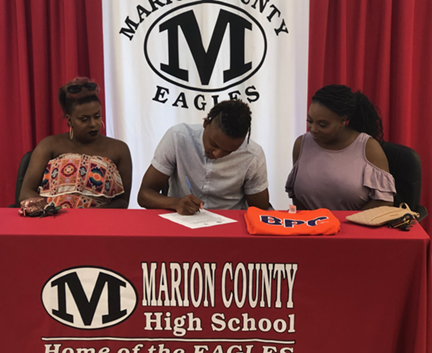 Tymes ran track all four years for Marion County. A multi-sport-athlete, Tymes played basketball and football for the Eagles.

According to his coaches, Tymes is a coachable athlete with an impressive work ethic. “He continually improves his craft,” Marion County Head Track & Field Coach Luke Jernigan said. “Even though he was the fastest in the region, he incessantly worked to develop each part of this race. Whether it was his start, his steps to the first hurdle, his form over the hurdle, or his finish to a race, Jamon has worked very hard to improve each of these components.”

Jernigan went on to say that Tymes has been a great example and teammate to the younger track athletes. “He was always at practice working and his teachers loved him in class,” Jernigan said. “He was always very respectful. Brewton-Parker is gaining an athlete with a strong work ethic and character to match.”