Southland quarterback Landon Law recently won the Three Kings Quarterback Challenge held in Winter Park, Florida on Sunday, June 3. On Thursday, June 7, he sat down with the Americus Times-Recorder to talk about that, as well as his life story. Photo by Ken Gustafson

AMERICUS – Landon Law, a rising junior at Southland Academy, is a multi-sport athlete for the Raiders. In addition to playing baseball, basketball and track, Law is a member of the Southland football team as well. He is expected to take over at quarterback for the Raiders in the upcoming 2018 season this Fall.

Recently, Law competed in the Three Kings Quarterback Challenge held in Winter Park, Florida, a suburb of Orlando. The camp is run by NUC Sports. They have camps like this all over the country. There are camps for high school quarterbacks, as well as those who play other positions.

According to Law, there were several quarterbacks from Central Florida, Tampa and one from the Atlanta area. They all competed for the right to be named one of the Three Kings of the camp. The competition was on Sunday, June 3. Law performed so well that day that he was awarded Camp MVP. Law sat down with the Americus Times-Recorder to describe the experience, among other things.

“We started off with just throwing drills, working on our steps and getting our arms loose,” Law said. “Then we threw routes on air to receivers with no defenders. Then we threw to receivers with defenders on them. We did one-on ones with them.” Law did so well that he even beat out four quarterbacks who will be going into their senior year this Fall. Law believes that his best attribute as a quarterback is his speed. “If I ever get pressured in the pocket, I can usually get out of there and not get sacked,” Law said. Law went on to say that he also believes he is accurate in throwing the football. 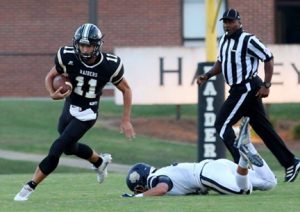 Landon Law, along with his twin brother, Luke Law, were both born on February 12, 2002 to Tracy and Lisa Law. Landon began playing football and baseball when he was five or six years old. “My Dad had me playing rec baseball since I was, like, five or six and also football at that same age,” Law said. Law went on to say that he always was a pitcher in baseball and has always played quarterback in football.

His twin brother, Luke Law, is also a multi-sport athlete at Southland. “We throw in the yard a lot and play basketball in the driveway,” Landon Law said. “Our TV stays on ESPN or other sports channels. We like to watch sports on TV. I don’t really like video games. I’d rather be outside doing something. We have a pool in the back, so I swim a lot,” Law continued. Law went on to say that if he wasn’t playing basketball for the Raiders, he would like to be on the swim team at Southland Academy. 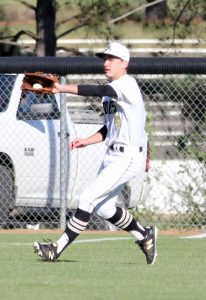 As far as academics are concerned, Law loves History, particularly World History. “I like World History. I like figuring out what’s going on anywhere besides America,” Law said. “I like both American and World History, but World History is more interesting to me.” Law went on to say that his least favorite subject is Math. “I’m decent at Math. It’s just that’s it’s not my favorite thing to do,” Law said.

As far as his favorite foods to eat, Law says that he likes chicken. “Any kind of fried chicken is good,” Law said. “Peanut Butter is my favorite spreading for sure. My favorite dessert is probably cheesecake. I love cheesecake.” Law went on to say that his least favorite food is broccoli and vegetables in general.

As far as his plans after high school are concerned, Law would like to attend Ole Miss, but is open to playing football at another college. “If any schools offer me a football scholarship, I’d probably look at those first,” Law said. “For academics, I’d go to Ole Miss.”

When asked if he thought he could play football for the Rebels, Law said that it would probably depend on how the upcoming season goes. According to Law, this upcoming football season will be his first season starting. He has been a backup to Alex Roach, who has now graduated. Law said that he received a camp invite from Valdosta State, but no real offers as of yet. Law said that he does not wish to be a two-sport athlete in college. 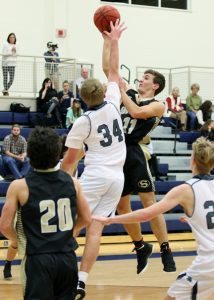 Southland’s Landon Law going up for a basket against Brookwood during the 2017-18 season.
Photo by Sheri Bass: ATR Archive

Law has high praises for both Rundy Foster, the Southland head basketball coach and Robert Murray, the head football coach. “I like them both,” Law said. “They’re not easy on you, but they’re not too hard on you. They encourage you, but they also tell you what you did wrong. Coach Murray, I’d do anything for him. I’d run through a brick wall for Coach Murray. He’s just a great leader and ever since he’s been here, the atmosphere has changed in football. Everybody loves him. They all want to work hard for him,” Law continued. Law went on to say that Coach Foster has been at Southland for a while and that he has the same type of love from his players.

Law said that the biggest and most exciting thing that happened to him personally in his life took place last year. In a game against Westfield, which took place on August 18, 2017, Law ran a kickoff return 70 yards for a touchdown. The Raiders went on to win that game 44-0. Law also said that watching Payton Manning perform the way he did in Super Bowl L in leading the Denver Broncos over the Carolina Panthers was one of the most exciting moments for him in his life.

Landon Law has two more years at Southland Academy. Needless to say, it should be exciting to see what he accomplishes in those two years both on the field and court, as well as in the classroom.