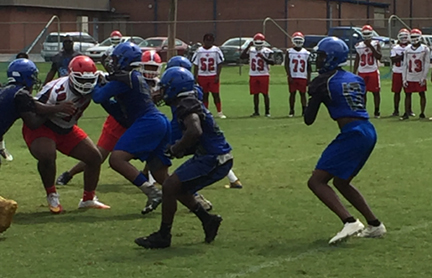 Americus-Sumter quarterback Kierston Harvey about to throw a pass during OTAs against the Westover defense. Photo by Ken Gustafson

Essentially, it was a practice between all three schools to help each team practice on the things each team needs to work on for their upcoming Fall seasons.

“Today we have a team session consisting of Westover, Turner County and Americus-Sumter high school,” ASH Offensive Line Coach Ryan McKenzie said. “What we did was we invited teams over. We dressed in helmets and jerseys only, and we’re doing inside drills. We’re also doing perimeter drills. We’re doing seven-on-seven drills, and we’re doing a team period.” Coach McKenzie went on to say that the inside drill is just inside runs for the offensive lines and defensive lines, linebackers and running backs. “The perimeter drill is for all the skill positions.,” McKenzie said. “The perimeter drill is where we bring everybody together and everybody runs strictly along the sideline. You try to run outside. The last session is our team session where we come together and we try to put the big picture together. It’s a regular inter-squad scrimmage.” 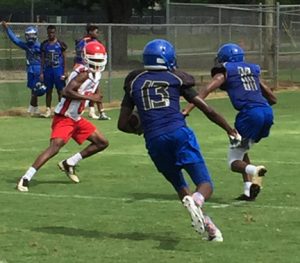 Americus-Sumter’s Samurai Crumbley running down field with the football.
Photo by Ken Gustafson

McKenzie went on to say that Americus-Sumter Quarterback Kierston Harvey is doing a phenomenal job in leading the team. “We’re getting a lot of production from our wide receiver skilled group,” McKenzie said. “Our offensive line is showing improvement, but we have a long way to go. We’ve got a lot of work to do.” 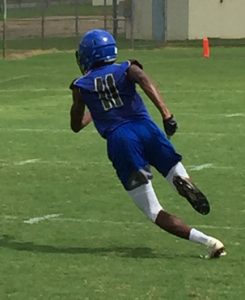 Willoughby runs with the football.
Photo by Ken Gustafson

As far as players battling for starting jobs, McKenzie went on to say that everybody is competing for jobs. “We’re new here on the staff, so everybody has an opportunity to get a job,” McKenzie said. “We’re going to allow everybody to play. As a staff, we’re going to come back and evaluate the film. Once we evaluate the film, everybody is going to have an opportunity to compete for a starting position. The defense is playing really well as a unit. We just want to see guys flying around. There’s nobody in particular that we’re looking at. We want everybody to just fly around and show great effort, enthusiasm and intensity.” 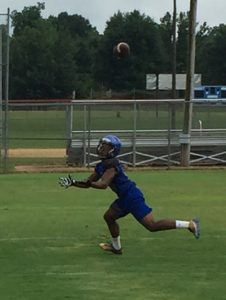 While the Panthers were in on one of their offensive plays against Turner County, A.J. Stokes made a diving catch that exited the ASH sideline. Overall, Stokes was pleased with his performance on the day. “It’s been really good. I’ve been making key blocks. The whole offense has been competing and doing really good,” Stokes said. “I need to work on sealing my blocks off the edge on the defensive ends and linebackers.” 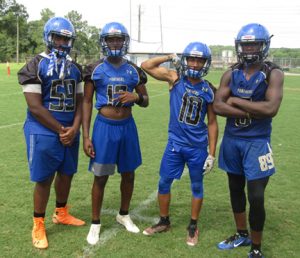 Braxton Cross, who plays on the defensive side of the ball for the Panthers, said OTAs have been good for him. However, he knows exactly what part of his game he needs to work on. “I need to work on breaking down and getting a tackle. That’s about it,” Cross said.  By “breaking down” Cross meant getting lower than the player whom he’s trying to tackle. There’s an old expression in football entitled “Low man wins.”

For Kierston Harvey, OTAs went very well overall, but he believes his team still has a lot of work to do. “OTAs went very well. I’m really proud of my team,” Harvey said. “I’ve seen a lot of great things, as well as negative things that we need to work on. Mostly, I’m proud of the fact that we were able to learn so fast and get moving quickly on offense, as well as defense. On the negative side, when we get tired, we need to be able to maintain composure, keep our heads up and play fundamental ball. That’s what I can take from it.” 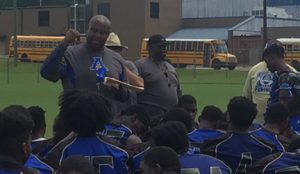 One great thing about having the OTAs on Tuesday was that, for most of the morning, it was cloudy and cool. “It was a blessing from God because we got a day that was cloudy and it wasn’t too hot outside,” Americus-Sumter Head Coach Larry Harold said. “The guys hung in there pretty well. We went almost two hours and got some really good work done.” However, Coach Harold was quick to point out that his squad has a long way to go. “It’s just the second week of June,” Harold said. “We’re just trying to prepare for the other contact camps that we’ll be going to in the next couple of weeks.”

Team prays after a long morning of OTAs.
Photo by Ken Gustafson

As far as players battling for starting jobs at particular positions, Coach Harold said that right now, it’s really hard to tell. “It’s kind of hard to judge right now because we’re dressed in just helmets and T-shirts,” Harold said. “Basically, you have to wait till you get into full pads to start, but I think we’ve got pretty much a lot of battles on both sides of the ball. I believe in competition at every position, and it makes us better as a team. It helps the program overall down the road.” Harold went on to say that right now, the young guys know that they can compete for a spot as long as they work hard and do the things that we ask them to do.”

Coach Harold said that he will be taking a group of linemen, along with some wide receivers and quarterbacks, to a one-day seven-on-seven camp at the University of Georgia on Thursday, June 15. The following week, the team will head to Waycross, GA to participate in a two-day team camp at Ware County High School. “That will be our first contact camp, so we’ll be able get a chance to see a little more live action like you saw today,” Coach Harold said. The camp at Ware County High School will take place Wednesday through Thursday, June 21-22.