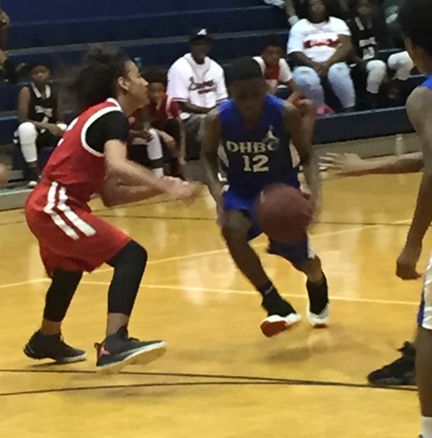 AMERICUS – Cameron Evans and Brandon Pope both scored in double-figures to lead the 14u Sumter County Warriors to a 44-35 victory over the 14u Macon County Bulldogs Friday night, June 15, at Ninth Grade Academy. It was the final game of the night in the Dwight Harris Boys Club Basketball Summer League. Evans led all scorers with 16 points and Pope scored 15.

“I think, overall, the guys did good. They played good defense,” 14u Warriors Head Coach Scotty Terry said. “They moved the ball around very well and knocked down three-pointers.” Though he was happy with the win, Coach Terry emphasized that his players need to be more unselfish and play as a team. He also was concerned about his team’s defensive play. “We need to work on our defense more. We need to share the ball more. We’re a little selfish at times.” 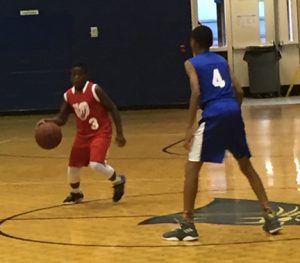 Macon County scored the opening basket when Christopher Lake hit a three-pointer. However, the Warriors took control during the rest of the half and built a 26-15 lead at halftime. Pope scored 13 of his game-total 15 points in the first half, including a three-pointer. Evans scored eight of his game-total 16 points to lead the Warriors in the first half. 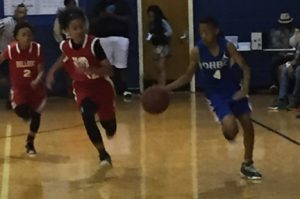 The 14u Macon County Bulldogs were led in first-half scoring by Christopher Lake with five points.  Latron Smith and Dontavious Collier each had four first-half points and Jhai’Taiviyauhn Banks scored two. Banks ended up leading the Bulldogs in scoring for the game, as he would score 10 points in the second half for a game-total of 12 points.

The Bulldogs went on a 5-0 run to start the second half, forcing a timeout by Terry to settle his troops down. Out of the timeout, the Warriors regrouped and went on a 5-0 run of their own. The run was capped off with a basket by Evans. The game was back-and-forth throughout the second half and the Bulldogs made it close near the end of the game. However, the Warriors were able to hold on and win 44-35.