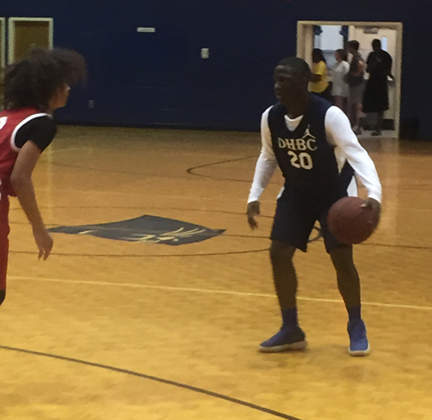 Jazz guard Ronquillo Wilson with the basketball guarded by a Macon County defender. He scored four points in the loss to the Bulldogs. Photo by Ken Gustafson

AMERICUS – On Monday evening, June 18, the 14u Macon County Bulldogs used a 21-8 run in the second half to pull away and defeat the 14u Sumter County Jazz 50-26 in the final game of the night in the Dwight Harris Boys Club Basketball Summer League at Ninth Grade Academy.

Landon Austin led the Bulldogs with 20 points on the night and Christopher Lake had 10. Jhai’Taiviyauhn Banks chipped in nine points in the Bulldogs’ winning cause. 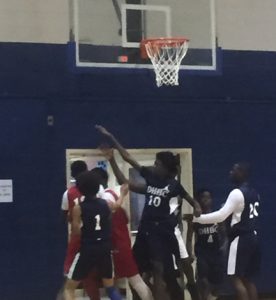 Both the 14u Macon County Bulldogs and the Sumter County Jazz fighting for the rebound.
Photo by Ken Gustafson

Both teams played a close first half, but Macon County went into halftime with a 21-14 lead. Austin scored 10 of his 20 points in the first half.

In the second half, the Bulldogs overwhelmed the Jazz by going on a 21-8 run. Braylon Terry hit a couple of shots to try to keep the Jazz in it, but it would be the Bulldogs’ night.

The 14u Sumter County Jazz came into this game undefeated and having already beaten Macon County. However, the Bulldogs got their revenge. They improve to 5-2 on the season, while the Jazz drop to 6-1.