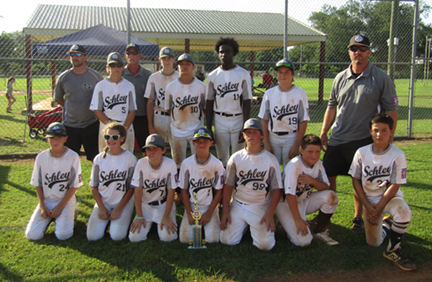 ELLAVILLE – After defeating Taylor County 12-1 on Thursday, June 21, and losing a hard-fought game to Troup County 10-7 on Saturday, June 23, the Schley County 12u All-Stars were two wins away from winning the Dixie Youth District Tournament.

It was a double-elimination tournament. Therefore, having already lost to Troup County, Schley County would have to win two straight games to claim the district crown. However, they would only have to win one game to go to the Dixie Youth State Tournament being that each district sends their top two teams. The state tournament is in Swainsboro, GA Friday through Sunday, July 6-8.

Both those games would take place on Sunday, June 24, in approximately 93-degree heat at the Schley County Parks & Recreation baseball complex.

Their first hurdle to overcome was Thomaston. For the first three innings, neither team could get any offense going as Schley County starter Landon Godwin and Thomaston starter Cohen Ivie were able to contain the hitters from both teams. 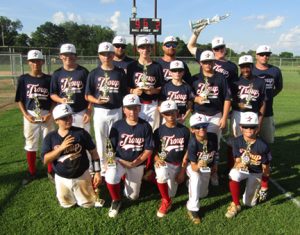 However, the boys from Ellaville exploded in the fourth inning. They scored five runs on four hits. Jay Kanazawa led off with a base hit, followed by a triple by Jack Clark, scoring Kanazawa. Nick White then doubled home Clark to give Schley County a 2-0 lead. Trenton Stubbs then reached on an error, then stole second base. Landon Godwin then reached on an error. White, Stubbs and Godwin would all eventually score to give Schley County a 5-0 lead with two innings to go. Godwin gave up one hit to Thomaston in their half of the fourth inning as J.T. Reeves singled. However, Godwin got Kaden Goins to hit into a double play and then struck out Cohen Ivie to end the inning. 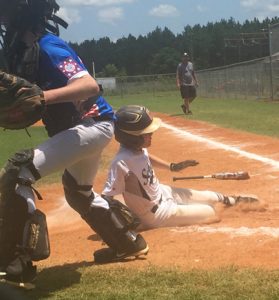 In the top of the fifth, Schley County resumed their onslaught of Thomaston. They scored five more runs on four hits. They were able to take advantage of a walk and an error. Both Stubbs and Owen Palowski doubled in the inning and drove home a combined three RBIs. Sam Forehand hit a triple and Carson Westbrook singled and stole both second and third base.

Thomaston got their only run of the game in the bottom of the fifth inning. Dawson Caldwell led off the inning by reaching on an error and stealing second base against Schley County relief pitcher Trenton Stubbs. Drake Dyer then singled and advanced on an error. Caldwell scored on the play, but that ended up being Thomaston’s only run of the game. 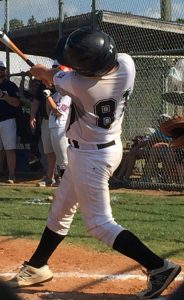 Brody Smith went 1-for-2 and drove in two RBIs in Schley’s 18-1 win over Thomaston.
Photo by Ken Gustafson

In the top of the sixth inning, Schley County exploded again with eight runs on five hits to put the game away. Rylan Conner and JaLewis Solomon led off the inning with walks. Brody Smith then singled, driving in two runs. This was followed by a single by Sam Forehand. Carson Westbrook then singled, driving in a run, followed by a sacrifice fly by Jay Kanazawa, which scored another run. Jack Clark reached on a fielder’s choice and advanced on an error. Nick White then doubled, driving in two more runs. Stubbs reached on an error, followed by single by Godwin. Owen Palowski was hit by a pitch, which drove home another run. Destiny LeCroy hit into a fielder’s choice and advanced to second on a wild pitch. Godwin tried to score on the play, but was thrown out at the plate for the second out of the inning. Rylan Conner struck out to end the inning, but the damage was done as Schley County led 18-1. All three Thomaston batters went in order in the bottom of the sixth to end the game. By virtue of this win, Schley County has qualified for the Dixie Youth 12u State Tournament in Swainsboro. 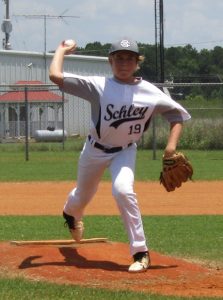 This set up a rematch between Schley County and Troup County for the district championship.

Troup County had beaten Schley County 10-7 earlier in the tournament. 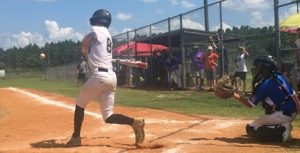 Schley County’s Nick White went 2-for-3, drove in two RBis, reached on an error and scored in Schley’s 18-1 win over Thomaston.
Photo by Ken Gustafson

Troup County resumed their onslaught in the top of the second inning. The boys from LaGrange scored five more runs on just two hits. They were able to take advantage of walks, an error and two hit batsmen. 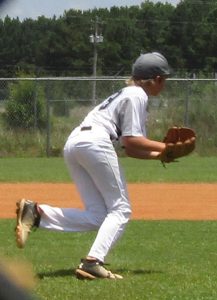 Schley County pitcher Landon Godwin fielding a ground ball and about to throw to first base.
Photo by Ken Gustafson

The Schley County offense struggled against Troup starter Steven Hill. They only managed four hits the entire game. In the third inning, Schley County managed to get runners at second and third, but LeCroy, Forehand and Solomon all struck out to end the threat.

Troup County added another run in the third inning to give themselves a 9-0 lead. Schley County was able to get on the board in the fifth. Nick White led off with a double. Then Trenton Stubbs doubled home White for Schley’s first run of the game. Landon Godwin then singled and stole second base. Stubbs eventually scored, but Godwin was thrown out at third base when Owen Palowski hit into a fielder’s choice.  Ryaln Conner grounded out and Brody Smith lined out to end the inning.

By this time, Trenton Stubbs had come in to pitch and was able to quell the offensive onslaught of Troup County. Schley County, trailing 9-2, had one last chance in the bottom of the sixth inning to mount a comeback. However, it was not to be as LeCroy flew out, Forehand grounded out and Solomon struck out to end the game. Schley County fell to Troup County 9-2. 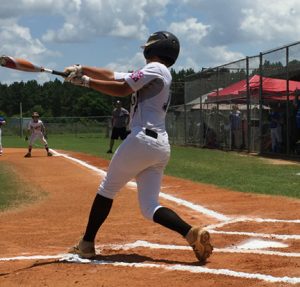 Schley County’s Jack Clark tripled in the fourth inning and drove in an RBI in the team’s 18-1 win over Thomaston.
Photo by Ken Gustafson

By virtue of winning the district tournament, the Troup County 12u All-Stars will advance to the 12u Dixie Youth State Tournament to be played in Swainsboro, GA. Schley County will join them as the second-place team.