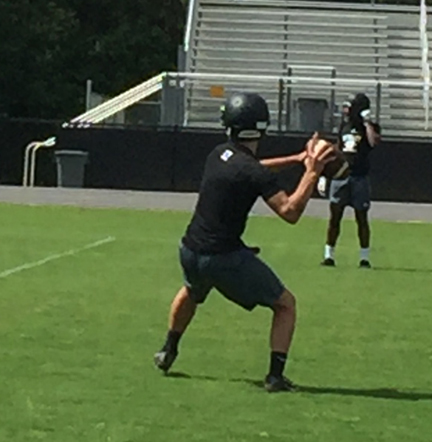 Schley County quarterback Jarrett Long going back to pass in the scrimmage against Taylor County. Photo by Ken Gustafson

The players on each team got a lot of reps on offense and defense and they were able to hone their skills in preparation for their upcoming seasons.

“I thought we played well today,” Schley County Head Coach Darren Alford said. “In the first two games especially, we played really good. We’re not really deep, so when you play as long as you have to play on a hot day, I felt like we wilted toward the end. I’m not saying that we didn’t play hard, but we didn’t perform as well. Our kids were trying. They were out there trying, but we didn’t perform as well in the last two games. I think a lot of it had to do with kids going both ways. We’ve got to get in a little bit better shape. As far as the first two games, I thought we were good. I thought we were crisp. I thought we did the things we needed to do.” 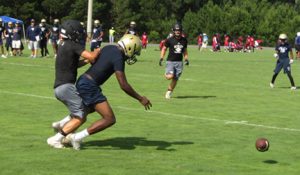 Archer Hathaway will be a rising senior coming this fall. He is an offensive lineman for the Wildcats. In his observations of how the team was performing Thursday morning, he saw that catching the football was something that the offense needed to really work on. “We really have to work on making sure that we’re looking the ball in and catching the ball,” Hathaway said. “We’re running really good routes and getting open. We just have to focus on catching it. We’re playing really good defense. Our defense is locking down the offense and not letting them get into the end zone.”

Defensive Coordinator Tim Peavy was very pleased with how his defense was performing, particularly in the scrimmage with Taylor County. “I thought we did some really good things right there,” Peavy said. “I thought our reads were pretty good. We still have to work on a few things. There are a few assignments where we have to make sure our eyes are disciplined and we are reading our keys. As a whole right there, that was a great session for us. We got a couple of interceptions. I’m pretty pleased, but we have room for improvement.” Coach Peavy was referring to the scrimmage with Taylor County.

The tournament began at 9 a.m. with Schley County playing Mitchell County. After that, they played Taylor County, followed by Wilcox County and West Laurens. Each team played four games, though nobody really kept score. They were more or less seven-on-seven practices.

However, Thursday’s proceedings dealt with something far more important than football. Each player and coach at Thursday’s FCA camp at Schley County High School heard the message of the Gospel of Jesus Christ and how each of them could be assured they would spend eternity in Heaven. 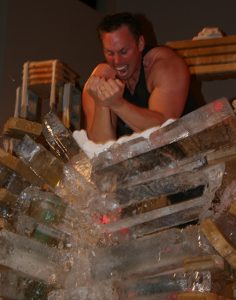 Rev. Warren Alford is a member of the Strength Team and Senior Pastor of Victory Worship Center in Americus. He presented the Gospel of Christ to the football players and coaches at Schley County’s FCA tournament.
Photo by strengthteam.com

Coach Alford’s brother, the Rev. Warren Alford, is the Senior Pastor at Victory Worship Center in Americus. He is also a Board Member of the Strength Team: A group made up of ministers who were former athletes. The Strength Team travels around the country and around the world, performing incredible feats of strength, such as breaking blocks of ice with their elbows. They perform in front of audiences while proclaiming the Gospel of Christ. According to the group’s website: www.strengthteam.com, The team was founded by Mike Hagan, a former player for the Seattle Seahawks. The team is made up of ministers who were former college and professional football players, Olympians, powerlifters, body builders and pro wrestlers. Their demonstrations of their feats of strength allow them to share a “life-changing message.” 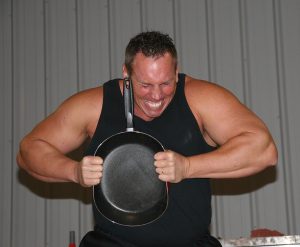 Rev. Alford was at the FCA camp and shared the Gospel with the players and coaches of all the teams who were present. “My brother is a missionary. He travels all over the world with the Strength Team,” Coach Darren Alford said. “He’s also the pastor of Victory Worship Center in Americus. He came here today and did a Strength Team talk to the kids. They received him well. We had a lot of kids make commitments to the Lord today. I was really excited about that. I told the coaches, ‘If none of us win a game the rest of the year, I feel like we’ve had a successful year because we’ve impacted kids in a positive way. Bottom line, that’s what we’re trying to do and that’s what we’re trying to get done’.” Coach Alford went on to say that he and other coaches want to be good role models and teach kids about life and help kids be successful in life.