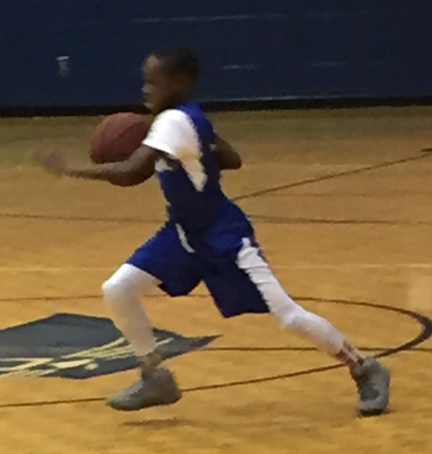 : 11u Warriors point guard Jaseph Jordan scored 21 points in the Warriors’ 2-overtime loss to the Jazz. Photo by Ken Gustafson

AMERICUS – It took two overtime periods to decide it, but the 11u Jazz were able to pull out a 38-34 victory over the 11u Warriors on Saturday, June 30, at the Dwight Harris Boys Club Basketball Summer League played at Ninth Grade Academy.

“All of the guys played hard. I think the other team came out with a little more intensity,” 11u Jazz Head Coach Reggie Jones said. “It took us a while to get started, but our guys came together and played really hard. They did really good.”

The Warriors jumped out to a 14-7 lead to start the game. That would be the score at halftime. Jaseph Jordan led the Warriors in the first half with seven points. Marion Willoughby and Austin Davis each had three first-half points, and Kendrell Butler scored one free throw. Jaylen Terry led the Jazz in the first half with three points, and both Keaston Taylor and Covery Hill each scored two points. However, the Jazz went on an 8-0 run to start the second half, taking the lead at 15-14. Kendrell Butler then gave the Warriors a 16-15 lead with a basket. From then on, it was back-and-forth between the two teams. 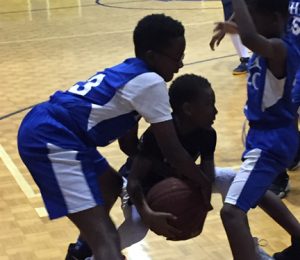 The Warriors’ Arthur Mays fighting a Jazz player for the ball.
Photo by Ken Gustafson

Covery Hill scored the first basket in overtime to give the 11u Jazz a 28-26 lead. The Warriors responded when Jaseph Jordan drove coast to coast for a layup to tie the score at 28-28. 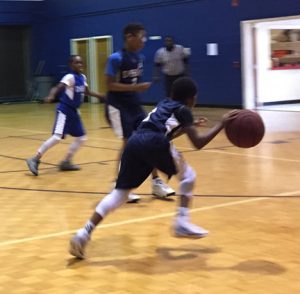 With 1:10 remaining in the first overtime period, the Warriors had the ball, but the Jazz were able to get a steal and call timeout with the score tied 28-28. Out of the timeout, the Jazz had the ball and Covery Hill was fouled, giving him a chance to give the Jazz a two-point lead. However, Hill missed both free throws. The Jazz would regain the lead on a basket by Ishmael Jones. Jordan responded with another layup, and the score was once again tied at 30-30.

Then with 19.1 seconds in overtime, Jaylen Terry scored to give the 11u Jazz a 32-30 lead. However, Jaseph Jordan was fouled with 15 seconds left in the overtime. Jordan made both free throws, tying the score at 32-32. Neither team was able to get a deciding basket, and the game went into a second overtime period.

Jaylen Terry led the Jazz with 13 points and Ishmael Jones scored 11. Covery Hill scored eight points. Keaston Taylor ended up with four points and Christopher Luster scored two. For the Warriors, they were led in scoring by Jaseph Jordan’s 21 points to lead all scorers. Marion Willoughby scored seven points and both Austin Davis and Kendrell Butler each scored three points.

17u Cavaliers roll past Jazz in Dwight Harris Summer…