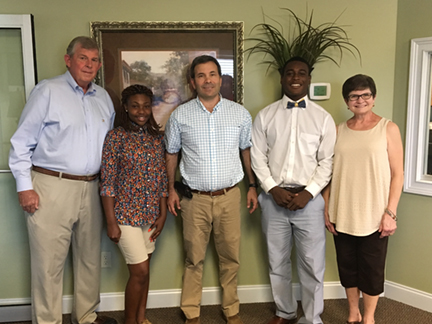 Worthy and Douglas, both seniors, were recipients of the Joshua Daniel Willis Student-Athlete Scholarship at Americus-Sumter’s baccalaureate service on May 17 of this year. Worthy was a member of the Americus-Sumter Girls’ Tennis Team. Douglas was a member of the ASH football team and also ran track. The scholarship was started in memory of Joshua Daniel Willis, a former Americus-Sumter High School football and tennis player and UGA football player who was killed in an automobile accident in 2008. Willis was the son of Carl and Karen Willis. Carl Wills is currently the Americus-Sumter Boys’ Tennis Coach and coaches the field goal kickers on the football team.

The scholarship is consistently funded each year by Sumter County’s School Board Chairman, Dr. Michael Busman of Phoebe-Sumter Family and Sports Medicine Center. The scholarship is also funded by Joshua’s family members and many of his friends. The award is presented each spring at Americus-Sumter’s baccalaureate service to at least two seniors possessing outstanding qualities in three areas: academics, athletics and leadership.

“Carl and I didn’t start the scholarship in Josh’s memory. Dr. Michael Busman graciously did that,” Karen Willis said. “He (Dr. Busman) is one example of how many, many members of our community have done things to honor Josh’s memory. As his parents, we are forever changed by his catastrophic loss. Knowing he has not been forgotten by his friends and family means more to us than most others can imagine. We reflect proudly on the fact that the scholarship recipients share some of the same qualities that Josh exemplified in his life.”

Mrs. Willis went on to say that recognizing Josh’s memory is being used to bring positivity into the lives of others through the scholarship. She said that she, along with her husband Carl, feel greatly blessed.