17u Cavaliers use massive second-half run to blow out Jazz 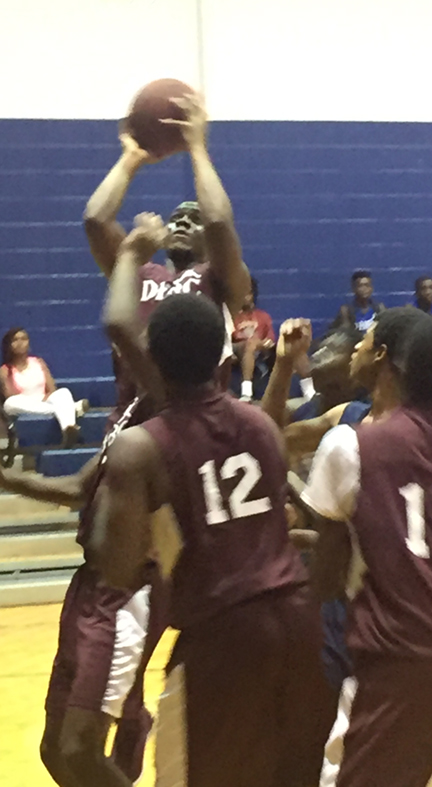 The 17u Cavaliers’ Jacoby Pride goes up and grabs a rebound against the Jazz. Photo by Ken Gustafson

AMERICUS – At halftime of the game between the 17u Jazz and 17u Cavaliers, the score was tied at 25-25 and the game had the makings of another down-to-the-wire finish. However, the Cavaliers dominated the boards and scored several fast-break baskets in the second half to pull away and defeat the Jazz 76-53 in Monday’s final game of the Dwight Harris Boys Club Basketball Summer League.

The game was played on Monday night, July 9, at Americus-Sumter Ninth Grade Academy. 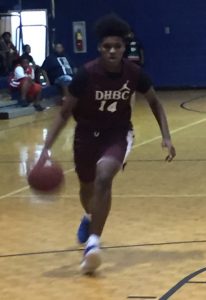 Cavaliers guard Tydrick Lassiter pushes the ball up the court. He led the 17u Cavaliers in scoring with 14 points.
Photo by Ken Gustafson

Both teams played an evenly-matched first half, and it showed as both teams were tied 25-25 at halftime. For the Cavaliers, Kanova Willoughby scored seven first-half points. Jakontist Gordon had five. Both Tydrick Lassiter and Luther Alford scored four points and Devin Berry scored two points in the first half. For the Jazz, they were led in first-half scoring by Jordan Taylor with 11 points. Taylor would go on to score a total of 24 points to lead all scorers. Jacoby Brown scored seven points in the first half for the Jazz. 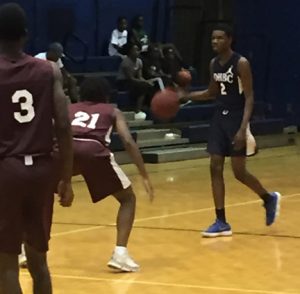 The 17u Jazz guard Jordan Taylor (2) with the basketball. Taylor led all scorers with 24 points.
Photo by Ken Gustafson

The Cavaliers went on an 8-1 run to start the second half. Part of this run was due to three-pointers by Tydrick Lassiter and Kanova Willoughby. The closest the Jazz got in the second half was within six points at 48-42. However, it was all Cavaliers after that. They scored six unanswered points before the Jazz got a basket to get the deficit to within 10 at 54-44. At that point, the Cavaliers took over. They went on a 12-2 run to pull away and secure the win. The Jazz tried to get back in the game by hoisting up three-pointers, but most of the shots wouldn’t fall. The Jazz struggled to get back defensively as the Cavaliers were able to score a number of fast-break layups. The Cavaliers also dominated on the glass in the second half, out-rebounding the Jazz both offensively and defensively.

The 17u Cavaliers finished the game with four players in double-figures. Tydrick Lassiter led the Cavaliers with 14 points for the game. Jakontist Gordon scored 11 points, and both Devin Berry and Kanova Willoughby each scored 10 points.

Jordan Taylor scored a total of 24 points for the Jazz. Only one other player was in double-figures for the Jazz: Jacoby Brown scored 12 points on the night.