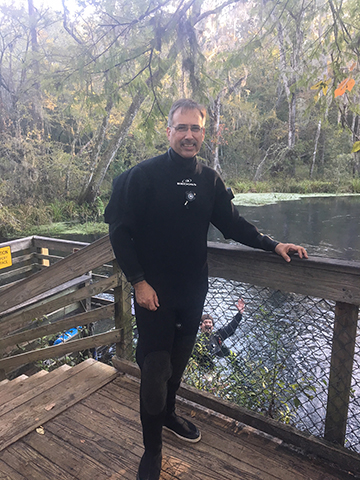 Cave diver Kelly Jessop of Americus is shown after one of his dives.

AMERICUS — The story of a 12-member boys soccer team (ages 11-16) and their 25-year-old coach trapped in a cave in Thailand held the world’s attention for just short of three weeks. Now that the team and coach have been rescued, in a daring and dangerous three-day mission, they will remain quarantined in hospitals until they are deemed healthy. According to national media reports, there is a chance some may have contracted histoplasmosis which is the result of breathing in fungal spores from bird and bat droppings.
Some Thai Navy SEALS, including a physician who were with those trapped for a week after they were discovered by two British cave divers, were also expected to emerge from the cave soon, according to media reports.
The boys and their coach became trapped in the cave on June 23 when sudden flooding filled their exit route. They were discovered sheltering in a small alcove by cave divers more than a week later. A former Thai Navy SEAL died in the cave after delivering oxygen tanks to the chamber where the team and coach waited for rescue.
The three-day rescue operation was fraught with logistical problems not to mention the complexity of the physical barriers of the cave passages. Decreasing oxygen levels in the cave, paired with increasing carbon dioxide levels, were placing even more pressure on those trying to design the best rescue plan. The threat of heavy rains remained constant.
Kelly Jessop, a physical therapist from Americus, is also a cave diver. He agreed to comment on the cave rescue in Thailand.
Jessop is also a mixed gas diver, which allows him to dive in caves with water depths greater than 300 ft. by using helium gas mixes. He has been involved in authoring four books, with one title for the National Speleological Society-Cave Diving Section and International Association of Nitrox and Technical Divers. Recently he did a documentary called Clean Water Floridan Aquifer that can be seen on PBS. Jessop has extensive diving experience in Florida and Georgia caves, as well as in Missouri and Mexico.
“This is a story that not only the world has watched with interest, but cave divers worldwide,” Jessop told the Times-Recorder. “In cave diving most accidents are recoveries, so to have a rescue operation, this is exciting.”
Jessop was asked to weigh in on the complexity of the rescue mission.
“Cave divers understand the challenge of entering a water-filled cave passage, where there is no direct ascent to the surface,” Jessop said. “This is difficult because they are navigating sumps, or a series of water-filled cave passages with dry passage. More likely the water clarity is nonexistent, so navigation was completed by feel until guidelines could be put in place. Their configuration won’t be traditional tanks on the back when we think of divers, but side-mounting, where the tanks are worn on the side to negotiate narrow areas, and to remove tanks easily if needed.
“The big challenge is getting a group of kids not even trained to swim, to be able to go through these areas, being guided by cave divers, in zero visibility, including a 15-inch restriction. Also, there is a lot of setting up that needs to occur, with air tanks between sumps, so they can swap out fresh tanks. Logistically this takes a lot of time to get things in place.
“It is a tragedy that the Navy SEAL from Thailand died … Where we think of military divers being the best, they aren’t trained in handling overhead diving, and entering submerged caves,” Jessop said. “In this country, we have had so many divers enter caves without being cave diving trained, get disoriented, and drown. Cave diving — where it sounds like a death wish — can be done safely with training and following some basic rules.”
Jessop has been cave diving 20 years with 1,500 cave dives logged.
“My cave diving has become more science- and research-based diving to understand the interaction between water quality and species that live in caves,” he said. “I have done a couple body recovery operations, and can appreciate what is occurring in Thailand.”
Jessop also finds that this story and its exposure is “good for cave divers.”
“It is valid sport that can be done safely, and it is a skill set that does have import,” he said. “Most cave diving incidents are fatalities, so cave divers making a rescue is wonderful news in our community.”