17u Warriors use two big scoring runs to throttle Jazz 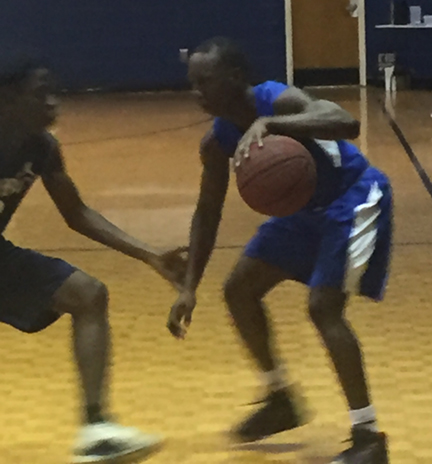 Jacobe McCuller of the Warriors with the ball being guarded by a Jazz player. McCuller scored two points in the Warriors’ 71-54 win over the Jazz. Photo by Ken Gustafson

AMERICUS – The 17u Jazz were coming off a tough 76-53 loss on Monday, July 9, to the 17u Cavaliers in a game that was tied 25-25 at halftime. They were hoping to right the ship Tuesday night, July 10, when they took on the 17u Warriors in the Dwight Harris Boys Club Basketball Summer League at Americus-Sumter Ninth Grade Academy.

However, the Warriors had other plans. They started off the game with 13 unanswered points and went on a 13-2 run in the second half to cruise to a 71-54 win.

Down 13-0 in the first half, the Jazz finally got on the scoreboard when Von Bacon hit a three-pointer. At that point, the Jazz stormed back, going on a 29-16 run to tie the game at 29-29 with under two minutes left in the first half.

Jacoby Brown and Jordan Taylor both scored 10 first-half points to help the Jazz get back in the game. Jarmeik Smith also scored eight points in the first half for the Jazz. Latravyion Bridges and Quandarius Hightower each scored seven first-half points to lead the Warriors. 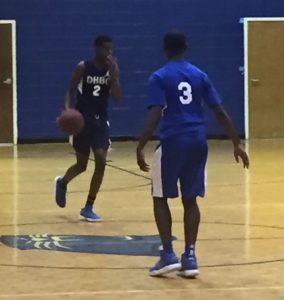 Jazz point guard Jordan Taylor with the ball being guarded by Jaheim Banks of the Warriors. Taylor scored 19 points in the Jazz 71-54 loss.
Photo by Ken Gustafson

It was a close game for the first few minutes of the first half. The Warriors built a seven-point lead at 50-43, but Jacoby Brown hit a three-pointer to put the Jazz to within four at 50-46 with 10:30 to go in the game. However, that would be as close as the Jazz would get as the Warriors went on a 13-2 run to increase their lead to 63-48 with 4:41 to go in the game. That second scoring run by the 17u Warriors would guarantee them the victory. They went on to win 71-54.

The Jazz also had two players in double-figures. Jordan Taylor led the Jazz with 19 points and Jacoby Brown finished with 16. Jarmeik Smith scored nine points and Von Bacon chipped in seven points in the losing cause.