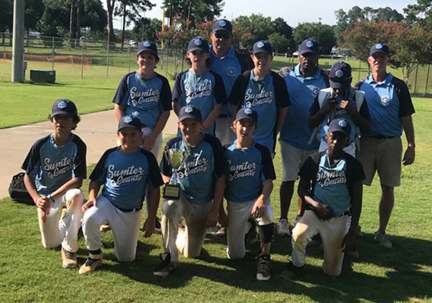 The boys from Americus opened tournament play against Vidalia on Tuesday evening, July 10, winning 5-3. Perry Usher started on the mound for Sumter County. He pitched four innings before being relieved by Fisher Britt in the fifth inning. Luke Exley came on in the sixth inning to seal the win.

Vidalia jumped out early with a first-inning solo home run. However, Sumter County responded by taking the lead in the third inning. They played solid defense against Vidalia and got the 5-3 victory. 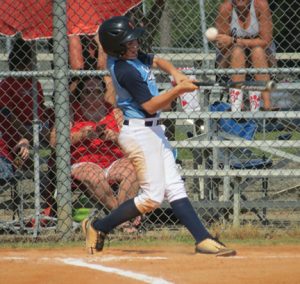 Perry Usher started on the mound against Vidalia and pitched the first four innings. He was one of four pitchers to pitch against the Lyons All-Stars.
Submitted Photo

Next up for Sumter County was a date with the Ware County 12u All-Stars in the second round on Wednesday, July 11. Luke Exley started on the mound for Sumter County. Sumter got the bats going as they took a 3-0 lead in the top of the first on hits by Fisher Britt, Perry Usher and Will Godwin. Ware County responded by scoring three runs to tie the game at 3-3 in the bottom of the first inning. Travis Pennington came on in relief of Exley in the second inning. Pennington pitched three solid innings for Sumter County. The boys from Americus kept the bats hot as they took a 10-5 lead through five innings, highlighted by Will Godwin’s two-run home run in the fifth. Luke Tarrer came on to pitch in the final inning. Tarrer allowed one run before closing the game out for the 10-6 win. 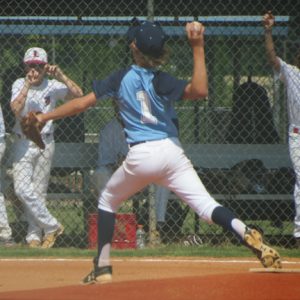 Fisher Britt pitched in relief in Sumter’s 5-3 win over Vidalia. He also pitched in the 15-14 loss to Lyons.
Submitted Photo

The undefeated Sumter County All-Stars would face the only other undefeated team in the tournament: The All-Stars from Lyons, GA. This contest was for the opportunity to advance to the state championship game. The boys from Americus were able to re-capture the home-run power they had in the Kiwanis tournament a month ago. Sumter County got home runs from Luke Exley and Anthony Tyson, along with two home runs from Will Godwin. This barrage of home runs by Sumter County put them ever closer to a berth in the GPRA State Championship Game. Perry Usher, along with Luke Tarrer, Fisher Britt and Cedric Smith all pitched for Sumter County. Unfortunately for Sumter, in spite of their offensive output, they fell to Lyons 15-14. The game was three hours long and went nine full innings.

The loss to Lyons resulted in Sumter County having to play a second game on Thursday, July 12, against Wayne County. The Wayne County All-Stars advanced by knocking off Colquitt County earlier in the day. 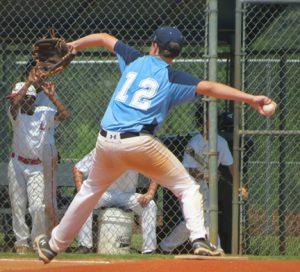 Luke Exley helped seal the 5-3 win for Sumter County over Vidalia as he was able to get the final out. Exley was the starting pitcher in the 10-6 win over Ware County. Exley also homered in the game against Lyons.
Submitted Photo

According to Sumter County Head Coach Phillip Exley, the hard-fought, extra-inning loss to Lyons took its toll on the team. Nevertheless, the 12u Sumter County All-Stars finished the tournament in third place. “A total of 36 teams started out in their district tournaments, with the best seven advancing to play in the state tournament,” Sumter County Head Coach Phillip Exley said. “Ending up in third place out of 36 teams is remarkable. This was the final game for all of these boys in the Sumter County Recreation Department Baseball Program, so it was a great ending to make it this far.” Exley went on to say that Jeff Fussell and Tim Estes do a great job of running the program. “I encourage all parents in Sumter County to keep their youth involved in Sumter County Recreation Department sports,” Exley said. “It will be fun watching these boys move on to school ball and continue to grow up. They are an amazing group of boys.”