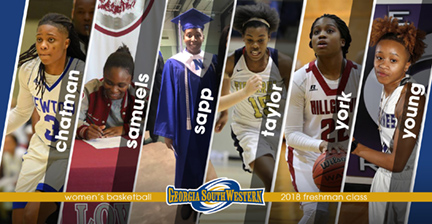 These new freshmen come into the GSW program having earned awards ranging from Player of the Year to All-State. Coach Britsky is expecting these young ladies to make immediate contributions to help improve upon last season’s 8-18 overall record.

Chatman averaged 20 points, seven rebounds and three steals per game her senior season. She led Newton in scoring all four years and helped the Rams get to the state championship game in 2018.

“Lexi is an athletic shooting guard with a scorer’s mentality that handles and passes with purpose,” Coach Britsky said. “She can create in the mid-range court and has range to the arc. Lexi is known for being the energy and the spark for her teams. She can score the basketball, but is willing to do what her team needs at that point in the game to get a win, whether it be a steal or a rebound. She can score the ball. That is a given, but I love the fact that she does it all.”

Jamesha Samuels is a shooting guard who comes to GSW from Lowndes County High School in Valdosta, GA. Samuels was named the 2018 GHSA Class 7A Region 1 Offensive Player of the Year. She was also named to the GACA All-State 7A-South and 2018 All-Region Teams.

Samuels averaged 17.2 points per game, three rebounds per game and three steals per game her senior season. She shot 48 percent from the floor overall and 30 percent from behind the three-point line during the 2017-18 season, connecting on 53 three-pointers.

“Jamesha is an All-State guard who can do it all,” Coach Britsky said. “She handles the ball well, attacks the basket hard and can drain the three-ball. She is a tough on-the-ball defender and quick in transition. She is made of that ‘something special’ and we are thrilled to have her in the family.”

Tamia Sapp is a forward from Northside-Warner Robins in Warner Robins, GA. Sapp was named to the 2018 GACA All-State 6A-South and 2018 All-Region Teams.

Sapp averaged 14 points and eight rebounds per game, as well as averaging two steals and two blocked shots during her senior year.

“Tamia is a forward with guard-like perimeter skills,” Coach Britsky said. “She has great jumping ability and is quick, agile and active on the glass. She has some range to the arc and attacks the basket well. We are so happy to have Tamia in the Hurricane family and we are excited to see the player she will become in this conference.”

Shaunteria Taylor is a shooting guard/forward from Tiftarea Academy in Chula, GA. Taylor was named the Georgia Independent School Association (GISA) Region 3-AAA Player of the Year. She is a three-time All-Region selection (2016-18).

Taylor averaged 17.9 points per game, 5.5 steals per game and 7.9 rebounds per game for her region championship team.

“Shaunteria brings great size with the ability to score and handle the ball,” Coach Britsky said. “I love ‘T’s passion for the game. She is a determined young lady who puts her eye on a goal and goes after it. I am excited to see how that determination plays out for her at the next level.”

Kierra York is a Power forward out of Hillgrove High School in Powder Springs, GA. York was named to the GHSA Class 7A Region 2 All-Region First Team and ranks fourth in career rebounds at Hillgrove. York was also a 2018 Beta Club National semifinalist. She was also a Who’s Who among Students academic recipient. York was a Posse Foundation semi-finalist and was a recipient of the 2017 Steve & Marjorie Harvey Foundation Girls Who Rule the World Leadership Award.

“Kierra plays so hard all the time,” Coach Britsky said. “She has perimeter skills, rebounds well and gets out in transition. She has the ability to elevate on her jump shot and makes athletic shots. She is a great student-athlete and will bring toughness and determination to the team.”

Young averaged 19.2 points and 4.2 rebounds per game. She also averaged 3.8 steals and 2.4 assists per game for the 22-8 Hurricanes. Gainesville won District 4-7A and advanced to the regional semifinals last season.

“Lele is tough. She is so quick and causes so much disruption on defense,” Britsky said. “She has quick hands and steals the ball before the opponent knows what happened. She can get to the rim, pass on a dime, and has three-point range. We are thrilled to have Lele on the team this year. Her energy, passion and competitiveness will add fuel to the team.”