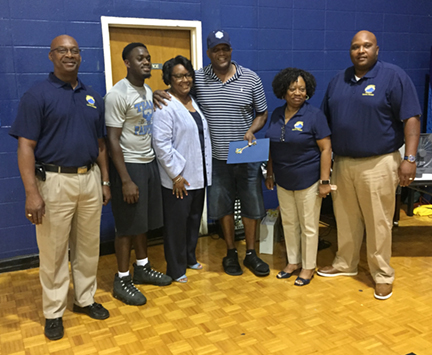 Council Member Daryl R. Dowdell made the proclamation at halftime of the 14u game between the Raptors and the Jazz. “Mr. Harris’s purpose for this community club is to involve children throughout the community, to help keep them off the streets during the summer. It has been proven that during his summer basketball season, the crime involving young children has gone down,” Dowdell told the crowd assembled. 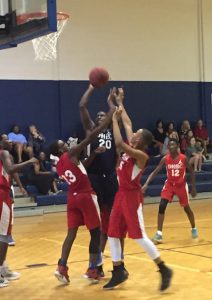 Ronquillo Wilson going up for a rebound for the 14u Jazz.
Photo by Ken Gustafson

Dwight Harris serves with the Sumter County Parks and Recreation Department (SCPRD) as the Athletic Director and runs the summer day camp. Six years ago, Harris started the Dwight Harris Boys Club Basketball Summer League. He began this endeavor to give kids an opportunity to play basketball and keep them off the streets. When asked if he wanted to comment about this prestigious honor that he received, Harris, at first, was speechless, but went on to make this comment: “It’s exciting. Words really can’t describe how I feel,” Harris said. “I didn’t do this for self-gratification, glory, or anything like that. I’m just trying to not fail my community and do a great job in this community in terms of helping the kids out and having a nice place for them to come, congregate, fellowship and play basketball. I also want to teach life skills.”

Wednesday night was also the final night for regular-season play for the 11u, 14u and 17u teams in the DHBC Basketball Summer League. The playoffs for those divisions start Thursday, July 19. However, for the 8u division, the playoffs began Wednesday night. The 8u Warriors took on the 8u Cavaliers in the first game of the evening at 5 p.m. The winner would take on the 8u Macon County Bulldogs in the 8u Championship Game on Saturday, July 21, at 10 a.m. 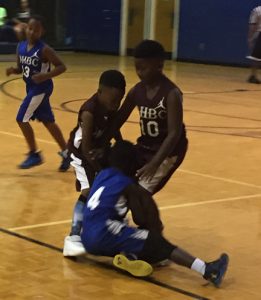 Brayden Evans of the 8u Warriors fighting for the ball with two Cavaliers.
Photo by Christine Aldridge

The Warriors took control early and never looked back. They jumped out to a 20-0 lead and ended up winning 24-1. The Cavaliers played their hearts out in this game. They hustled throughout the whole ball game. They just couldn’t put the ball in the basket. Fortunately, Ayden Robinson kept the Cavaliers from being shut out by hitting a free throw.

For the Warriors, they were led in scoring by Jarmaine Curry with nine points. Dometrius Monts scored six points. Tyran Smith had four. Brayden Evans scored three points and Jonathan Tyson rounded out the scoring with two points. The 8u Warriors will now face the Macon County Bulldogs in the 8u Championship Game on Saturday, July 21, at 10 a.m.

The next game was the final regular season game in the 14u division between the Jazz and the Raptors. This game was a back-and-forth affair the entire way. By halftime, the Raptors had a 16-15 lead over the Jazz. 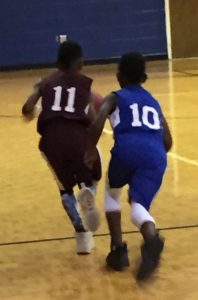 The Cavaliers’ Jamere Storey (11) with the ball being chased by the Warriors’ Tyran Smith (10).
Photo by Ken Gustafson

Anthony Tyson led the Raptors in the first half with seven points and Kyric Davis had five. For the Jazz, they were led in first-half scoring by Vernon Lockhart with seven points. The second half went much the same as the first with both teams going back and forth in an extremely close game. At one point, the Jazz led 35-34 would not relinquish the lead for the rest of the game. That would be as close as the Raptors would get. 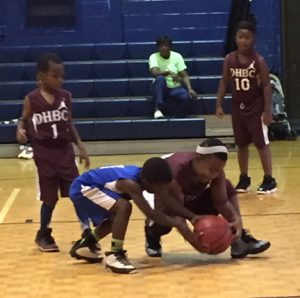 The 8u Warriors’ Jarmaine Curry and the Cavaliers’ Noah Waters fighting for the ball.
Photo by Ken Gustafson

They trailed 41-38 at that point. However, Vernon Lockhart hit a crucial three-pointer to put the Jazz up 44-38. Zyere Williams responded for the Raptors by scoring and getting fouled on the play. However, Williams missed the free throw. 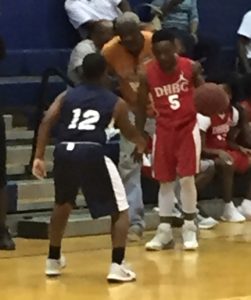 Anthony Tyson with the ball for the 14u Raptors.
Photo by Ken Gustafson

With 6.5 seconds to go, the Jazz’ Demarcus Deriso was fouled and made both free throws, sealing the 46-40 victory for the Jazz.