Devin Nash of the 14u Raptors goes up for a shot. Photo by Ken Gustafson

AMERICUS — The Dwight Harris Boys Club (DHBC) Basketball Summer League playoffs began Thursday, July 19, for the 11u, 14u and 17u age groups. There were some exciting games for fans to watch at Americus-Sumter Ninth Grade Academy.

The most exciting game by far was the last game of the evening. It was the second 17u semifinal game between the Rockets and the Warriors. Once again, there was a game that couldn’t be decided in regulation. It took an overtime period to declare a winner. The Warriors would come out on top in a 65-59 overtime thriller.

For most of regulation, the game was a back-and-forth affair. The Rockets jumped out to a 7-3 lead before the Warriors responded with a 5-0 run of their own, prompting the Rockets to call time out.

The game continued to be close throughout the first half. As the first half was winding down, the Warriors were leading 29-23. With seconds on the clock, Melton McCoy hit a three-pointer at the buzzer to cut the Warriors’ lead to 29-26 at the half. The first few minutes of the second half went back and forth between the two teams. With 12:15 to go in the game, the Rockets owned a 37-35 lead. They went on a 5-0 run to increase their lead to 42-35. 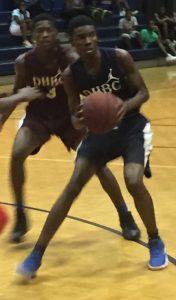 Jordan Taylor scored 26 points in the 17u Jazz loss to the Cavaliers in the DHBC playoff semifinals.
Photo by Ken Gustafson

The Rockets increased their lead to 11 at 47-36 as they went on a 5-1 run. However, momentum began to turn in the Warriors’ favor. They trailed 50-38 at one point, but scored eight unanswered points to bring themselves to within four at 50-46. The Warriors’ fans smelled a comeback and the excitement and tension filled the gym. The Warriors, coached by Southland Academy Boys Basketball Coach Rundy Foster, stepped up their defense and forced the Rockets into committing turnovers. Then, with the Rockets maintaining a 55-51 lead, Warriors guard Jacobe McCuller drove to the basket, scored and was fouled. McCuller made the free throw to cut the Rockets’ lead to one point at 55-54. The gym was alive with excitement and tension as fans knew this game would go down to the wire. Then the Warriors completed the comeback as Jahim Banks scored and was fouled. Banks hit the free throw and the Warriors were in front 57-55.

However, with 23.5 seconds left, Melton McCoy was fouled in the act of shooting and made both free throws, tying the game at 57-57. The Warriors would have the last shot to win the game in regulation with 10.3 seconds left. However, they were unable to convert and the game went to overtime. 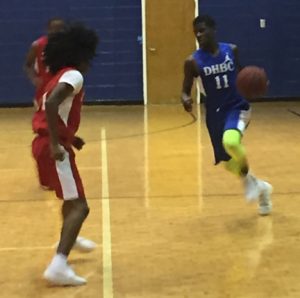 14u Warriors guard Cameron Evans with the ball. He scored eight points, including two three-pointers.
Photo by Ken Gustafson

In the overtime period, Jahim Banks of the Warriors was fouled and made both free throws to give his team a 59-57 lead. The Warriors got a defensive stop and Hashim Haugabook scored to increase their lead to 61-57. Owen Exley was able to score for the Rockets, but that would be as close as they would get. Banks drove to the basket and scored, increasing the lead to four. Then Haugabook sealed the overtime victory for the Warriors as he created a steal and scored to make the final 65-59 Warriors.

The Warriors had three players in double-figures. Jordan Wiley led them in scoring with 19 points and McCuller had 17. Jahim Banks chipped in 15 points for the winning Warriors.

As for the Rockets, they were led in scoring by Lakeviyon Walker and Melton McCoy. Each scored 17 points. Chancery Jackson was also in double-figures with 11 points. The Warriors will play the Cavaliers in the DHBC 17u Championship Game at 2:45 p.m. Saturday, July 21.

The Cavaliers got by the 17u Jazz by the score of 60-42 in the other 17u semifinal. Just four days ago, these two teams went into overtime to decide a winner. The Cavaliers won that game 77-74.

However, there would be no down-to-the-wire game on Thursday night. The Cavaliers took control early and dominated the entire game. The Cavaliers had four players in double-figures. Quevolia Willoughby led the team in scoring with 16 points. Both Jakontist Gordan and Jacoby Pride each had 13, and Luther Alford chipped in 11 for the winning cause. The Jazz were led by Jordan Taylor, who led all scorers with 26 points. Both Jy’Kobie Brown and Trantavious Robinson each had seven points for the Jazz.

In the 14u division, the Warriors took control in the first half and never let up as they cruised to a 46-21 victory over the 14u Raptors. Brandon Pope led the Warriors with 26 points. Cameron Evans also chipped in eight points in the winning cause.

In the 11u division, it was a hard-fought game between the Warriors and the Cavaliers. Both teams played a tightly-contested first half and the score was tied 11-11 at halftime. The second half was much like the first as both teams fought to get to the next round. However, it would be the Warriors who would come out on top 19-16. Marcus Harvey led the 11u Warriors with nine points, including a three-pointer. Kendrell Butler had four. Jaseph Jordan, Austin Davis and Antrone Grant each scored two points. The 11u Cavaliers were led in scoring by Jaden Tatum with eight points. William “Jase” Peterson scored five points, including a three-pointer, and Laquavion Davis scored three points on a three-pointer.