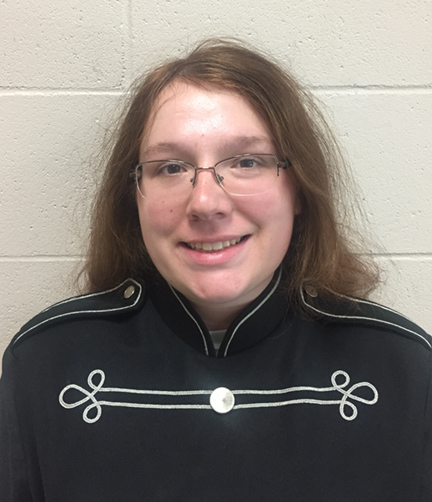 Senior Madison Sellers will be the Drum Major for the 2018 Schley County High School Marching Band. Photo by Ken Gustafson

Like the Schley County football team, the marching band embarks on an exciting new season of challenges, goals and opportunities. For one band member, this year will be particularly challenging as she steps into a new role with the marching band.

Madison Sellers, a senior, will be the Drum Major for the Schley County Marching Band. She was the only one to step up and audition for the position. “I’ve always wanted to do it. I’ve been in band since sixth grade,” Sellers said. “It’s such an honor to be able to be here and be the leader of something that allows me to help the little ones and spread my love of band to them. It’s been a really big part of my life and I would love to help the others feel the same joy that I have.”

Sellers is the daughter of Mike Sellers and Jenice Baker. Growing up, Sellers was attracted to music as the result of watching a talent show. “In elementary school, they had a talent show and there was a fifth grader there who played the flute,” Sellers said. “I know this is so corny, but it was the most beautiful thing I had ever heard. I was, like ‘I’m going to go play the flute’, and that’s exactly what I did. For six years, I played the flute.”

Many people who have either been in marching bands or have watched marching bands perform are familiar with what the role of the Drum Major is. Some, however, might not know or realize what is involved. “You’re the band director’s right-hand person,” Sellers said. “You help out with everyone. You’re the friendly face to everyone there,” Sellers said. “During Marching Band season, you go on the podium and you help direct. Of course, you’re there to help with everyone’s music, help them learn their parts, fix their instruments or help them get accustomed to their instruments. You’re just a band director’s right-hand man.”

Being in the marching band has afforded Sellers the chance to be at sporting events such as football games. According to Sellers, during her childhood, she played a lot of sports. “For most of my early childhood, I played a lot of sports,” Sellers said. “Soccer and softball were my two major ones, but I also played some tennis and badminton. I loved badminton, but there’s nothing here for badminton. I also played basketball.” Sellers went on to say that she stuck with soccer for a long time until she got too old for it. “There’s no league here in Schley County. There is a recreation department, but they can only take you if you’re under 13. Once I hit 13, they wouldn’t take me anymore. I did do cheerleading in elementary school when I was really little, but it just wasn’t for me.”

As far as her favorite foods, Sellers says she likes Macaroni & Cheese and Watermelon. As far as things that she likes to do outside of music or sports, Sellers says that she loves to draw and be outdoors watching animals. “I absolutely love animals,” Sellers said. “I aspire to be a Veterinarian as I grow up. I love space and astronomy as well. I love looking at the night sky. I have an app that points out all of the constellations and planets and gives a little information about them. It’s really nice.”