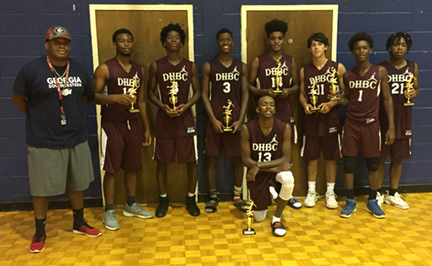 AMERICUS – It was an exciting month and a half for the 2018 Dwight Harris Boys Club Basketball Summer League. It all came to a climax on Saturday, July 21, as the championship games for all four age groups took place at Americus-Sumter Ninth Grade Academy.

By far, the most exciting game of the day was the 14u championship game between the Macon County Bulldogs and the 14u Warriors. This game was much like a boxing match. One team would take a big lead, and the other team would fight right back, eliminating the deficit. 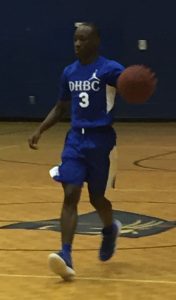 17u Warriors guard Jahim Banks with the ball. Banks scored 14 points in the 95-81 loss to the 17u Cavaliers.
Photo by Ken Gustafson

However, it came down to the last seconds. With Macon County leading 64-61, the Warriors had the ball. Warriors guard Cameron Evans pushed the ball up the court and got off a desperation three-point attempt with 0.4 seconds left. However, Evans was fouled on the shot, giving him the opportunity to tie the ball game by making three free throws. Unfortunately for Evans, he missed the first two and made the third, allowing the Macon County Bulldogs to escape with a 64-62 victory and the 14u DHBC Championship.

Up until that point, Evans had been clutch at the foul line, knocking down several free throws. He scored a total of 26 points to lead the Warriors. Cedric Smith was also in double-figures for the Warriors with 16 points. Landon Austin led Macon County with 27 points and Darius Collier chipped in 10 points in the winning cause. 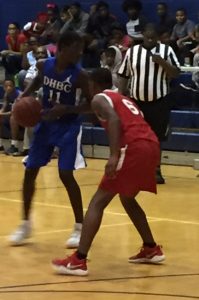 Macon County started out with a 12-5 lead. The Bulldogs increased their lead to 21-9 as they went on a 9-4 run. However, the Warriors responded by scoring five unanswered points to cut Macon County’s lead to 21-14. The Warriors continued to shorten the Bulldogs’ lead by cutting the deficit to 23-19 on a basket by Cameron Evans. The Bulldogs scored two-straight baskets to increase their lead to 27-19. However, the Warriors responded again with a 6-0 run to cut Macon County’s lead to 27-25. Macon County hit right back by scoring eight unanswered points to close out the first half with a 35-25 lead.

The Warriors stormed out of the gate by going on a 9-0 run, capped off by a basket by Cedric Smith with 15:30 left in the game. The Bulldogs scored four points to put themselves up 39-34, but Cedric Smith hit a three-pointer to put the Warriors within two at 39-37.

Macon County responded with a 5-0 run, but the Warriors punched right back with a 5-0 run of their own. Smith scored to cut the Bulldogs’ lead to 44-42. 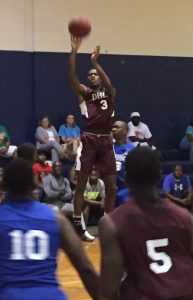 17u Cavaliers guard Quevolia Willoughby goes up to make a shot. Willoughby scored 18 points in the 95-81 championship win over the Warriors.
Photo by Ken Gustafson

Macon County outscored the Warriors 9-6 in the next few minutes to go up 53-48. This was capped off by a basket from Darius Collier. Smith responded for the Warriors by hitting a three-pointer with 7:35 left to cut the Bulldogs’ lead to 53-51. This was part of a 7-2 run by the Warriors to tie the ball game at 55-55. Cameron Evans made the tying basket on a layup with 3:39 left.

However, Macon County responded with another run. They scored seven unanswered points to take a 62-55 lead, capped off by a basket by Dontavious Collier. The Warriors got to within four as they outscored Macon County 4-1. Evans hit four-straight free throws to cut the Bulldogs’ lead to 63-59. The Warriors were able to get the ball back and got a basket from Braxton Davis to cut the lead to two. 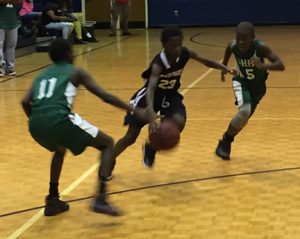 11u Macon County guard Frankie Raines with the ball. Raines scored 26 points to lead the 11u Bulldogs to the DHBC championship.
Photo by Ken Gustafson

With just a few seconds on the clock, Macon County had the ball and Darius Collier was fouled. However, Collier could only make one free throw, keeping the door opened for the Warriors to tie the game on a three-pointer. There was only about two seconds left on the clock as Cameron Evans pushed the ball up the court and got off a desperation three-point attempt. However, Evans was fouled on the attempt with 0.4 seconds left, giving him the opportunity to sink three free throws to tie the game and send it to overtime. However, Evans, who had been clutch at the line down the stretch, missed the first two free throws. He made the third one, but it wouldn’t matter as Macon County won the DHBC 14u Championship 64-62. 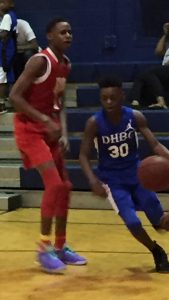 In the 8u championship, Macon County, led by Timothy Warren’s 11 points, defeated the 8u Warriors 24-13 to win the 8u DHBC Championship. The game was close most of the way, with Macon County only leading 7-6 at halftime. Macon County outscored the Warriors 10-4 in the first few minutes of the second half. However, Jarmaine Curry knocked down a three-pointer for the 8u Warriors to put them within four. That would be as close as the Warriors would get, however, as Lammarrion Smith knocked down a three-pointer to give Macon County a 20-13 lead. The Bulldogs went on to score four more points to finish off the Warriors 24-13 and win the 8u championship. In addition to Timothy Warren’s 11 points, Lammarrion Smith scored five points and Kha’madj Mitchell had four. For the Warriors, they were led in scoring by Jarmaine Curry with seven points. Dometrius Monts also chipped in six points for the Warriors.

Macon County went on an 11-3 run to begin the second half in part due to three-straight baskets by Raines. This run put the game away for the Bulldogs. They would go on to win 56-31 over the Celtics to win the 11u Championship. Raines finished with 26 points to lead Macon County. Jordan Hudson was also in double-figures for the Bulldogs, scoring 10 points on the day. Corderal Leverrett led the 11u Celtics with 17 points.

The Warriors got back in the game by outscoring the Cavaliers 10-7, capped off by a basket from Jahim Banks. At that point, the Cavaliers called time out. Out of the time out, the Warriors continued their comeback, scoring four unanswered points to cut their deficit to 52-48. The Warriors continued to stay within striking distance. In the late stages of the game, the Warriors got to within four at 74-70 when Jacoby McCuller scored. A couple of minutes later, Jordan Wiley was fouled and made both free throws, bringing the Warriors to within two at 74-72.

However, that would be as close as the Warriors would get. The Cavaliers went on a 7-0 run. McCuller hit a three-pointer stop the run, making the score 83-76 Cavaliers. However, the Cavaliers closed out the game with a 12-5 run to win the championship 95-81.