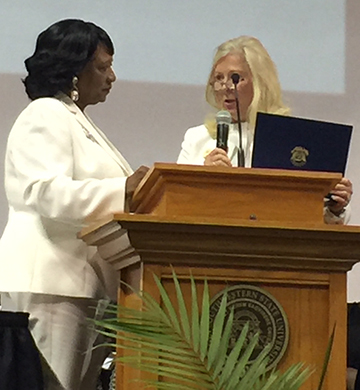 AMERICUS — The summer of 1963 was one of, if not the, most pivotal years of the Civil Rights Movement. The March on Washington and Martin Luther King Jr.’s famous “I Have a Dream Speech” challenged long-held beliefs of segregationists, only to be followed the next month by a church bombing in Birmingham that would claim the lives of four young girls. But before these two well-documented and memorable events, 15 girls from Americus were arrested in July 1963 for protesting a segregated movie theater, and then held for 45 days in the Leesburg Stockade, where they slept on a concrete floor and used a common, broken toilet, with little food and only warm water from a dripping faucet to drink.
Some 50 years later, they were honored in the State Capitol, and U.S. Congressmen John Lewis, Sanford Bishop, and Hank Johnson nominated them for the Presidential Medal of Freedom. On Saturday, July 21, those honors were echoed by keynote speaker Jody Redding, Southwest Regional Director for U.S. Sen. Johnny Isakson, who proclaimed, “We come from all walks of life to honor these women,” and credited them with much of the progress made in civil rights, here in Americus and throughout the country. Another keynote speaker, Travis “Trap” Love, actor and filmmaker, declared these women “paved the way for change,” in much the same way Boys and Girls Clubs “equip kids to make changes” in their own lives and the lives of others.
Mistress of Ceremonies, Yolanda Amadeo, meteorologist at WALB-TV in Albany, introduced all of the speakers, beginning with Bardin Hooks, local attorney with Arnold & Hooks, LLC, who welcomed the audience, thanking them for their support of the Boys and Girls Club, which, he said, “Works to empower youth and enable them to succeed. It is absolutely fitting that we honor these ‘stockade girls,’ who were, themselves ‘empowered youth,’ who were able to realize their full potential.” Americus Mayor Barry Blount followed Hooks’ welcome, thanking the women for their sacrifices. Others on the 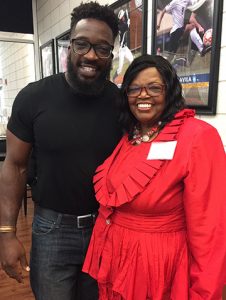 program included artist Rutha Harris, for Boys and Girls Club member Tierra Nunn, who recently graduated from the University of Georgia, and Valecia Sales-Seay, vice president for Operations of the Americus-Sumter Boys and Girls Club. Dot McCray, another recording artist, sang “Precious Lord, Take My Hand” before Karla Heath-Sands, news anchor from WALB-TV, retold the Stockade Story and listed each of the 15 girls held captive: surviving members of the group, Diane Dorsey-Bowens, Melinda Jones-Williams, Emmarene Kaigler-Streeter, Carol Barner-Seay, Laura Ruff-Saunders, Shirley Green-Reese, Lulu Westbrooks-Griffin, and Mae Smith-Davis, along with those who have passed away, Sandra Russell-Mansfield, Annie Lou Ragans-Laster, Billie Jo Thornton-Allen, Gloria Westbrooks-Breedlove, Pearl Brown, Mattie Crittenden-Reese, and Verna Hollis.
Additional recognitions were made by U.S. Sen. David Perdue’s Field Representative Kathy Burns, Director of Koinonia Farms Bren Dubay, and Kimberly Scott, educator/president of the Columbus Section of the National Council of Negro Women. Following a selection by Karla Heath-Sands, Green-Reese, president of the Boys and Girls Club of Americus-Sumter County and one of the Leesburg Stockade Girls, acknowledged and thanked each of the platform guests and the audience. She pointed out that, as a 14-year-old in 1963, she and 14 of her friends, aged 12 to 15, sat in that dark, dank cell while Martin Luther King Jr., marched on Washington, while four little girls were murdered in Birmingham, and the rest of the world, including these girls’ parents, knew nothing about their whereabouts. Today, though, people are learning. From a documentary on PBS to recognition at the state and local level, their story is being told. Saturday, that story attracted support for the Boys and Girls Club, which works throughout the country “to enable all young people, especially those who need us most, to reach their full potential as productive, caring, responsible citizens.”