Senior pitcher Saige Whaley will be counted on heavily to produce on the mound for the Wildcats in 2018. ATR Archive

ELLAVILLE – The 2017 Schley County girls softball team had, by most people’s standards, a very successful season. They went 19-11 overall in 2017 and were knocked out in the first round of the GHSA Class A Public State Playoffs by eventual state champions Gordon Lee. However, according to Schley County Head Coach Jody Sellers and his players, they feel they could have done much better. “In my opinion, and in most of my players’ opinion, we underachieved,” Sellers said. “Overall, we had a good year. We finished runner-up in the region to a very good Marion County team.” Sellers, who enters his fourth year at the helm of the Lady Wildcats, went on to describe the two games his squad played against Marion County in 2017. The Lady Wildcats lost to Marion County in Buena Vista on a walk-off home run in the eighth inning. When the Wildcats hosted Marion County, the Lady Eagles defeated Schley County by about four or five runs. According to Sellers, had Schley County won that game, they would have tied Marion County for first place in the region and it would have gone to a tie-breaking system. “It was a good year, but we know we can do better,” Sellers said.

Three seniors graduated from last year’s squad, including the Wildcats’ best pitcher for the past three years: Laine Frazier. The other two seniors who graduated were Saylor Ann Cross, a designated player, and Bailey Smith, a utility player. 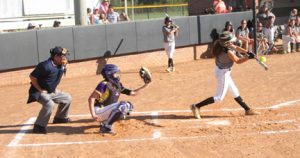 Junior Carmen Philips has been a two-year starter and will start at shortstop for the Lady Wildcats this year. Coach Sellers says that Philips is probably the best athlete on the team.
ATR Archive

In spite of those losses, Coach Sellers is excited that most of the squad from 2017 is back this year. According to Sellers, junior pitcher Saige Whaley and sophomore pitcher Perri DeVane will be heavily counted on to produce on the mound for the Lady Wildcats. “I’ve also have a freshman named Hannah Crawford who’s a pretty good little pitcher who may pitch some for us,” Sellers said.

Sellers plans to have DeVane play third base when Saige Whaley is pitching and vice versa. Junior Carmen Philips, a two-year starter, will start at shortstop. “She’s probably my best athlete…a really good shortstop,” Sellers said. Senior Kelli Rees will be starting at second base for the Wildcats. Emily Campbell will be playing first base. According to Sellers, Campbell is one of the best hitters on the team. Sellers plans to have junior catcher Havalyn Cross platoon with freshman Landry Whaley, the younger sister of Saige Whaley. “Landry is a really good freshman behind the plate,” Sellers said. “She’s going to be catching a lot of innings while platooning with Havalyn behind the plate.” According to Sellers, freshmen Hannah Crawford and Maddie Walker could see some time on varsity. 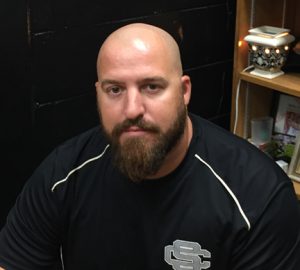 Jody Sellers will be entering his fourth season as the head coach of the Lady Wildcats.
Photo by Ken Gustafson

In the outfield, junior Nyiah Kelley will be playing left field. Junior Alexis Bradshaw will start in center field and senior Maddie Tobin will start in right field. Coach Sellers is also very high on junior Tamia Kelley. “She’ll be doing a lot of hitting for me. She can really fly and she handles the bat well,” Sellers said. Sellers went on to say that his niece, Jade Sellers, is a sophomore who will potentially see playing time. There’s a lot of depth on this team which, according to Sellers, is a nice problem to have. “We’re pretty deep,” Sellers said. “I’ve said I’ve got probably 12 girls that can play. The only bad thing is that I can only put nine or 10 in the lineup. Unfortunately, I’ve got a couple of players that will spend some time on the bench when they could go somewhere else and be a starter at most other schools. We’re fortunate to be pretty deep as far as the athleticism and the players that I’ve got.” Sellers said that he plans to carry 14 or 15 players on varsity.

This year, Coach Sellers is hoping that his squad can capture a region championship, but Marion County stands in the way. “Hopefully, we can make a run at region,” Sellers said. “I think Marion is the team to beat. They won it last year. They didn’t lose really anything. I thought we were the better team last year, but they beat us in the two games when it counted. I think we can make a run at the region and a run in the playoffs.”

The Lady Wildcats begin the 2018 season when they host Miller County on Monday, August 6, at 5 p.m.