Souther Field ‘on the road’ 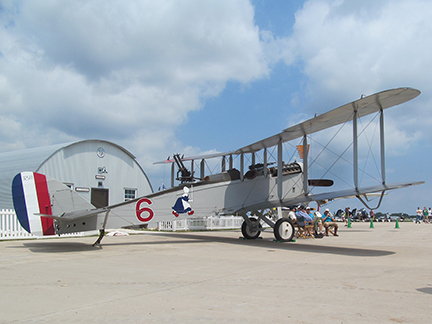 he Annwidh 41, an aircraft used in World War I.

Historic Souther Field sent two of its Innovation Team (I-Team) to the world’s largest aviation event in Oshkosh, Wisconsin, last week. The purpose was to identify and contact the owners of aircraft that the team like to see at Souther Field this fall as the field’s centennial is celebrated.
Mike Cochran, regarded as Souther Field’s historian, and this writer, visited with owners, restorers and pilots of World War I aircraft. Authentic original aircraft are rare, with full size replicas replacing many types that no longer exist. In addition, scale replicas round out the potential list of displayable planes. All of these gather at the annual EAA AirVenture in Oshkosh each July.
Each of these early aircraft are treasures and not put to needless risk. Travel to aviation events, such as the Great Aero Event and Fly-in at Souther, is usually accomplished by dismantling the airplane, trucking it to the site and then re-assembling it. This requires a variety of local resources to accomplish. The I-Team will begin reaching out to the local community to provide that much needed support.
Souther Field came into existence to prepare pilots for service in World War I. This is also the Centennial of the United States entering the war. While World War I and its aircraft are the focus, the Souther Field event will also include examples from all periods. Examples of these including aviation’s Golden Age of the 1920s and ‘30s; World War II and early jets were also contacted at Oshkosh.
In addition to an aero event this will be a “fly-in” where private pilots and their families will join local and neighboring folks for the weekend’s activities. Americus’ hospitality will make these special guests feel welcome.
This Centennial event is intended to be the first of annual aviation events at Historic Souther Field. Possible future themes include, in 2019, “The Beginning of the End” featuring the World War II Army Air Forces (Air Corps) aircraft that paved the way for the Normandy Invasion. The year 2019 is the 75th Anniversary of D-Day. Naval aircraft of the great carrier fleets that fought across the Pacific would be the focus in 2020, the 75th Anniversary of V-J Day, the end of the war in the Pacific. Agricultural aviation (crop dusting) will celebrate its centennial in 2021. And so on.
The Historic Souther Field “I-Team” members are excited about the history and future of the airport and hope the community will share in that excitement!