Lady Raiders’ softball tuning up for an outstanding season 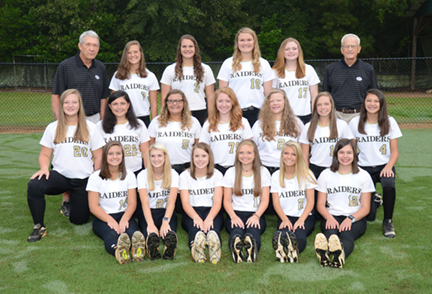 AMERICUS – The Southland Lady Raiders’ softball team has already been playing pre-season games since July 8 to get ready for the 2018 season. In 2017, their season ended in the first round of the GISA Class AAA state playoffs, losing to Pinewood Christian. Coach Rusty Tondee is in his second year as head coach of the Lady Raiders. He believes that the amount of preparation that has been put in during the summer will help his club once the regular season gets underway. 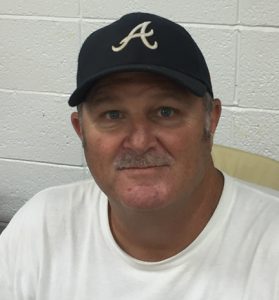 Rusty Tondee will begin his second year as head coach of the Lady Raiders.
Photo by Ken Gustafson

Coach Tondee went on to say that his team has been practicing for the last three to four weeks to get ready. “We’ve been practicing two to three times a week and playing two to three times a week,” Tondee said. “We wanted to treat the pre-season and summer ball as a way to evaluate players and to work out the kinks before it really starts.” Last weekend, the Lady Raiders played in a tournament at Westfield up in Perry. They played Westfield, the defending GISA Class AAA state champions, and Piedmont Academy, the defending GISA Class AA state champions. They also played Westwood and Fullington Academy and went 1-3 in the tournament. “During the pre-season, these games were scrimmage games,” Tondee said. “The score wasn’t important to either one of us. It was a scrimmage that we use to evaluate players, to get players reps in different positions to see if they are able to play those positions.”

For the Lady Raiders, the regular season begins Friday, August 3, in Dublin at a round-robin tournament at Trinity Christian School. It will be a triple-header. Their first game will be at 12 p.m. against Edmund Burke Academy, followed by a game against Brentwood at 2 p.m. The final game of the triple-header will be against the host school, Trinity Christian, at 4:30 p.m.

In the outfield, sophomore Brookland Weaver will be in left field. Freshman Morgan Minick will start in center field and Abby Lightner will start in right field. Youngdale will not have to carry the entire load as a pitcher. “We’ve split some innings up between three girls this summer,” Tondee said. “That’s between Rylan, Alli Dent and Sara Beth Storey.” 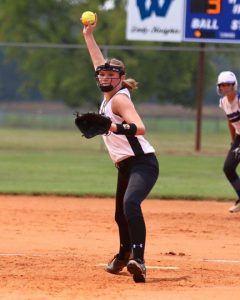 Rylan Youngdale pitching in last week’s pre-season tournament at Westfield. She will pitch Game 1 of the Lady Raiders’ first game to open the season on Friday, August 3, against Edmund Burke Academy.
Photo by Sherri Bass

According to Tondee, there is no one player on the team that one could say is the best hitter. “It depends on what day it is,” Tondee said. “We have several of them that when they’re hot, they’re hot. They can all get hot at any given time. I don’t like to say we have a best hitter. I just think that we’ve got several girls that have the capability to put the ball in play and can get on a hot streak at any time.”

According to Tondee, this year’s team is a relatively young team with no seniors and three juniors. The rest are freshmen and sophomores. However, he stated that many of the sophomores got a lot of playing time last year. “We’re hoping that we just continue that progress of maturing and getting better with the game experience that we had with so many of them having to play as ninth-graders last year. We hope that is going to be beneficial to us,” Tondee said.

While Rylan Youngdale is one of the three juniors, she did not pitch on the varsity in 2017. She pitched on the B Team. “She’s a rookie as far as when it comes to varsity pitching. In fact, all three of our pitchers are rookies on the varsity level,” Tondee said. “That’s why we wanted to play this pre-season. Last year, in my first year, we started about a week before the season could start, and that was it. We had some experienced players then.” Tondee went on to say that he wanted to get the excitement rolling a little more. He decided to start almost a month earlier this year to prepare for the season. “I wanted to make sure our pitchers, who are rookie pitchers, get plenty of experience during the pre-season so that it would get rid of the nerves when they have to go out and pitch in a real varsity game when it counts.”

With no seniors, three juniors and the rest of the team made up of freshmen and sophomores, Coach Tondee is expecting his three juniors: Rylan Youngdale, Hannah Mitchell and Abby Lightner, to step up and take more of a leadership role, but he went on to say that the sophomores and freshmen can be leaders as well. “The other day at practice, I challenged all the girls to be leaders. Which one is going to step up,” Tondee said. “You’re expected to be a leader because you’re the oldest, but leadership comes from those who want to step out and be a leader, no matter how old you are. I will say that our juniors have provided tremendous leadership during this pre-season.” Tondee went on to say that he and his coaching staff are working to get the girls to show more vocal leadership. “We’re working on trying to be more vocal when it comes to playing,” Tondee said. “We’re not quite as loud and vocal as I would like for us to be.”

As far as who will be Southland’s toughest competition in Region 3-AAA, Tondee believes that the team down in Valdosta will give the Lady Raiders the toughest competition. “This year, it’s probably going to be Valwood,” Tondee said. “They’ve got more returning starters.” Tondee went on to say that Brookwood was really tough a year ago. “We split with Valwood and we got beat twice by one or two runs by Brookwood last year. Brookwood lost their catcher. To me, she was the best player in the region, but Valwood is returning more of their starters than Brookwood.”