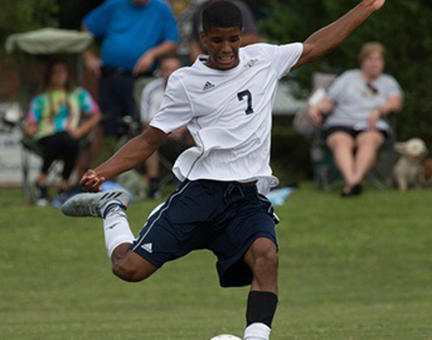 AMERICUS – In 2017, the Georgia Southwestern State University Men’s Soccer Team had their best season in school history. The Hurricanes finished the 2017 season at 5-10-1. While that may not look impressive, the record does not indicate how competitive the Hurricanes were. They lost five games by one goal.

Head Coach Warren Russ will be going into his 12th season as the Hurricanes’ skipper. “I think we had a very good season. We set the school record for wins in a season. We’re happy with that,” Russ said. “We felt like there were certainly at least two or three games that we let get away from us and maybe we should have done better.” Coach Russ went on to say that he felt his club last year was closer to a .500 ball club. “We had some good runs, but then we had some things go against us a little bit,” Russ said. “We felt that where we were last year was a good stepping stone coming into this year. We’ve made some improvements and upgrades from 2016 to 2017. We’ve been building this for a couple of years. Last year was a good season. We were happy with a lot of the performances, but we felt like it put us in good stead to jump off this year.”

GSW lost seven seniors from last year’s team, including their leading goal scorer and All-Peach Belt Conference performer Silvio Polly. Polly led the Hurricanes with eight goals and three assists in 2017 and was an All-Conference performer the last two years. However, Russ has brought in a solid group of in-coming freshmen and transfers that should fill the void and increase the club’s win total from last year.

“A lot of those seniors played substantial minutes and provided a lot of leadership,” Russ said. “We’ll certainly miss them. We feel like we’ve brought in good replacements. We have a good nucleus of returners that we are happy with.” 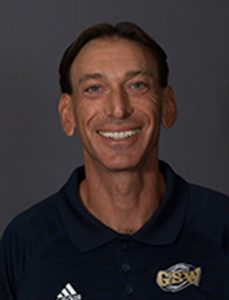 GSW Men’s Head Soccer Coach Warren Russ is entering his 12th season at the helm of the Hurricanes.
Photo by GSW

While it is too early to determine what the starting lineup will look like when the Hurricanes open the season on the road at Warner University on Thursday, August 30, the Hurricanes bring back an experienced back line. “We have everyone back except one,” Russ said. Defender JP Merlet returns for his junior season. Nick Bottka, a fifth-year senior, will also be back to help shore up the Hurricanes’ back line. Russ is also counting on senior defenders Mohamed Balde and Julian Rugel to provide experience and leadership in the defensive backfield. “We really feel like the back line is going to be one of our strengths with the experience that we have,” Russ said.

Most of the midfielders for GSW are back as well, including senior Jonathan Sayers. Sayers had one goal and two assists for the Hurricanes in 2017. Coach Russ plans to use Sayers on the left side of the midfield. Seniors Chris Avery and Shane Madray will be expected to provide production and leadership as outside midfielders. Another experienced player returning for his final season is senior forward Thiago Elias. The Sao Paulo, Brazil native scored one goal and had two assists for GSW in 2017. “We think he’s going to have a breakout season,” Russ said. Russ is also excited about the return of junior forward Dylan Marshall and sophomore forward Divin Moke. Marshall and Moke each scored four goals and tallied one assist for the Hurricanes last season. They were tied for second on the team in goals scored behind Polly. 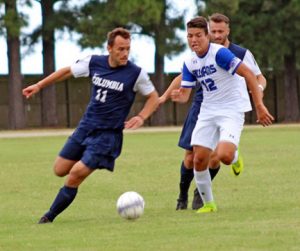 Junior forward Rafael Faria has transferred to Georgia Southwestern State from Williams Baptist College. Coach Russ expects Faria to add solid depth to the Hurricanes’ midfield and to have a good season.
Photo by WBC Athletics

Russ went on to say that he is excited about the newcomers they’ve been able to add to enhance productivity. “We’ve got four freshmen coming in and two transfers,” Russ said. “Adam Jackson comes to us from North Georgia, up near Athens. We’ve got Aystin Martinez who comes to us from down in Florida near Tampa. We think they’re both going to be good players in the future. Both have had good pre-seasons so far. We’ve brought in a defender from Colombia by the name of Andres Labrada and a goalkeeper from Italy by the name of Francesco Bazzano. That rounds out our freshman class.” The two transfer players that Russ has brought in are junior midfielder Rafael Faria and senior forward Matheus Alves. Faria is a transfer from Williams Baptist College, an NAIA school in Walnut Ridge, AR. During his sophomore season at WBC a year ago, the Porto Alegre, Brazil native scored one goal on the season for the Eagles, but it was a game-winner to defeat Freed-Hardeman 1-0. “He’s going to compete for playing time in our midfield. We think he’s going to have a good season,” Russ said.

Senior forward Matheus Alves is transferring into GSW from Sacred Heart University in Connecticut. Coach Russ is expecting Alves to be able to score goals for the Hurricanes.
Photo by SHU Athletic Communications

Alves, a native of Salvador, Brazil, is a transfer from Sacred Heart University, an NCAA Division I school in Fairfield, CT. Alves played in 16 games and started five of them for the Pioneers in 2017. Prior to his experience at Sacred Heart, Alves played at Neosho County Community College in Kansas. During the 2016 season, Alves led the Panthers with 13 goals and three assists while earning All-Conference and All-Region honors. “We feel like he’s going to have a really good season as well,” Russ said. “I’m really happy with all six of the newcomers.”

As far as the goalkeeping situation is concerned, in-coming freshman Francesco Bazzano will provide depth at the position along with junior goalkeeper Matthew Sherry. Sherry was a backup to Joshua Swift, who was second in the Peach Belt Conference with 70 saves in 2017. According to Coach Russ, Sherry is recovering from an injury, but Russ expects both Sherry and Bazzano to achieve the level that Joshua Swift achieved a year ago.

Coach Russ believes that he and his staff have filled all the holes that they needed to fill for the upcoming season with the newcomers. “We should have replaced production that we lost,” Russ said. “Obviously, we won’t know until the season starts, but based on the first few practices, we’re happy with what’s going on.”

As far as tactics and style of play is concerned, Coach Russ believes that with the way his team is set up with the pace that they have in certain places, they will fluctuate between a 4-4-2 and a 3-5-2 (three defenders, five midfielders, two forwards). “This will depend upon our position and our health. I wouldn’t say that I have a preferred set up just yet, but those formations would be our two majority choices as we get closer to the season,” Russ said.

In 2017, the Hurricanes were clearly better than their record showed. Nonetheless, they were able to achieve the best record in the program’s history. With the returning veterans coming back, coupled with the influx of talented freshmen and transfers, there’s a very good chance the 2018 GSW Hurricanes will win more games this year than in 2017. The Peach Belt Conference is an extremely tough conference. Both Young Harris College and Lander University are ranked #11 and #12 respectively in the United Soccer Coaches Pre-Season Top 25 poll. However, the Hurricanes are ready for the challenge. They open the season on the road Thursday, August 30, at Warner University in Florida at 7 p.m., followed by a 10 a.m. match at Webber International on Saturday, September 1. The Hurricanes’ first home game will be on Wednesday, September 6, against Brewton-Parker College at 7 p.m. It will be the first men’s soccer home game under the lights. There will be free tailgating before the match and post-match fireworks.