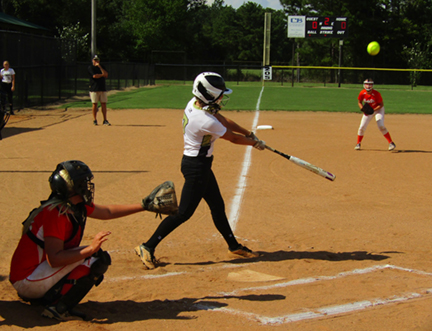 Southland first baseman Reese Roland went 2-for-4 and drove in two RBIs in the 12-4 win over Westwood. Photo by Ken Gustafson

AMERICUS – The Southland Lady Raiders Softball Team (3-2) scored six runs in the bottom of the fifth inning to defeat Westwood 12-4 in a run-ruled game on Thursday, August 9, at Southland Academy.

According to Southland Head Coach Rusty Tondee, it was the most complete game his team has played this season. “We started off a little slow, but we really caught fire at about the third inning,” Tondee said. “We played much better in every area of the game. We played well in the field. We hit the ball. We got great pitching from Alli Dent. We ran the bases really well mentally. We knew when to run and when to stop. This was probably our most complete game of the year.”

Alli Dent pitched the entire game for the Lady Raiders. She gave up four runs on five hits, walked one, hit one batter and struck out two. 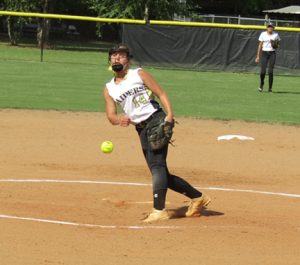 Dent retired the first three Westwood batters she faced in the top of the first inning. She struck out Gracie Pollick and Reid Johnson and got Karlie Jones to ground out. Southland scored the first run of the game in the bottom of the second inning. With one out, Morgan Minick singled and advanced to second on a fielder’s choice by Katie Rogers. Minick then stole third base. After Abby Lightner drew a walk, Hannah Mitchell singled, driving in Minick to give Southland the lead.

Westwood responded in the top of the third when Emily Childers led off the inning with a double. After Graci Caldwell struck out, Pollick hit a triple, driving in Childers to tie the game at 1-1. A passed ball allowed Pollick to score from third to give Westwood the lead. However, Dent was able to retire the next two hitters to end the threat.

With one out in the bottom of the third, Sara Beth Storey singled and advanced on a passed ball. Brookland Weaver then singled, advancing Storey to third base. Storey then scored on a wild pitch to tie the game at 2-2. 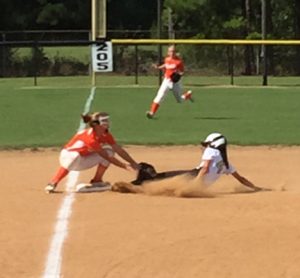 Morgan Minick slides safely into third base. She went 2-for-4 and drove in an RBI in the 12-4 win over Westwood.
Photo by Ken Gustafson

However, the Lady Raiders responded in their half of the fourth. Katie Rogers led off with a single, then Lightner reached on an error. After Hannah Mitchell flew out, Alli Dent singled, driving in a run. This was followed by a two-RBI double by Holly McCain. Storey then reached on an error by the Westwood center fielder and stole second base. Weaver flew out for the second out of the inning, but Reese Roland singled to drive in another RBI. By the end of the fourth inning, the Lady Raiders had a 6-3 lead.

Westwood added a run in the top of the fifth, but a six-run explosion by Southland in the bottom of the fifth put the game away. With one out, Lightner reached on an error and advanced to second on a wild pitch. Both Lightner and Mitchell would eventually score. Alli Dent got her second hit of the game, followed by a single by McCain. Storey and Weaver both singled, with Storey driving in an RBI. Reese Roland tripled to drive in another run, followed by a bunt single by Minick, which drove in yet another run. In total, the Lady Raiders scored six runs on seven hits and took advantage of two Westwood errors in the bottom of the fifth to end the game.

This was a welcomed result after the 9-1 loss to Southwest Georgia Academy on Tuesday, August 7. The Lady Raiders will try to continue their winning ways when they play a rematch against Southwest Georgia Academy on Saturday, August 11, at 9:30 a.m. at the GSW softball complex. This is part of a round-robin day of play at Georgia Southwestern State with four teams meeting at GSW to get two games each. The Lady Raiders will play their second game on Saturday, August 11, at 2:45 p.m. against Robert Toombs Christian Academy.