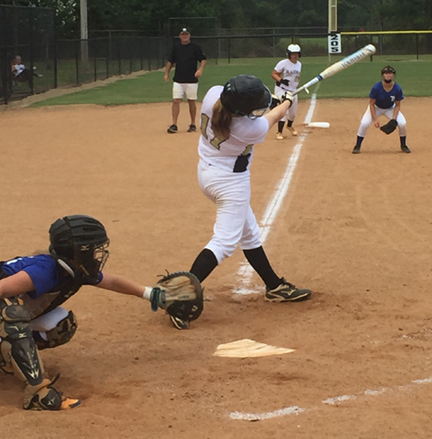 Southland’s TJ Bowden drove in two runs for Southland in their 11-1 win over Terrell Academy. Photo by Ken Gustafson

AMERICUS – The Southland Academy softball team took care of business against Terrell Academy long before the rains came in the fifth inning on Tuesday, August 14, at Southland Academy. The Lady Raiders ended up winning 11-1.

Holly McCain led all hitters for Southland by getting four hits while Alli Dent had three. Rylan Youngdale was solid in the circle. She gave up only one run on the day.

It was a much-needed victory for the Lady Raiders after two tough losses last Saturday, August 11, to Southwest Georgia Academy and Robert Toombs Christian Academy. 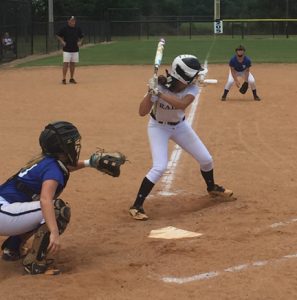 Southland’s Reese Roland at the plate against Terrell Academy. Roland got at least two hits against Westwood.
Photo by Ken Gustafson

Southland scored three runs in the first inning, highlighted by a two-run double by Katie Rogers. The Lady Raiders drove in two more runs in the top of the second as Alli Dent singled to drive in two RBIs.

Reese Roland doubled to lead off the third inning, then advanced to third base on a passed ball. Roland eventually scored on an error by the Westwood first baseman. Roland singled again later in the game, then scored on a Katie Rogers double. Rogers scored on a single by Morgan Minick. Katie Rogers and Holly McCain led all hitters with two hits each. 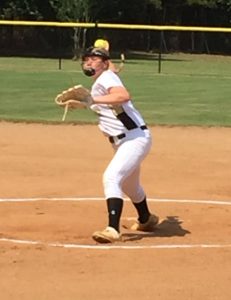 Southland pitcher Rylan Youngdale was dominant against both Terrell Academy and Westwood this week. Coach Rusty Tondee said that Youngdale pitched her best game of the year down in Camilla against the Lady Wildcats.
Photo by Ken Gustafson

The game was run-ruled after five innings. Rylan Youngdale went the distance for the Lady Raiders. She pitched all five innings. She struck out three, walked two and didn’t give up any runs. “Rylan pitched her best game of the year and had really good command of her pitches,” Southland Head Coach Rusty Tondee said.

Southland (5-4) has now won two straight and will try and make it three when they travel to Chula, Georgia to take on Tiftarea Academy on Tuesday, August 21. First pitch is scheduled for 4:30 p.m.