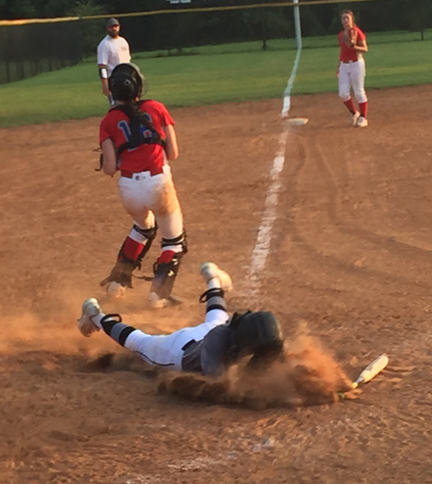 Schley County left fielder Nyiah Kelley slides head-first into home plate, scoring the go-ahead run that would give the Lady Wildcats a 9-8 come-from-behind win over Veterans. Photo by Ken Gustafson

ELLAVILLE – With the Lady Wildcats trailing 8-7 in the bottom of the sixth inning, pitcher Saige Whaley doubled in two runs to complete an eight-run, come-from-behind victory over Veterans by the score of 9-8 on Wednesday, August 15, at Schley County High School.

Though he was happy with the win, Schley County Head Coach Jody Sellars would like to see his team be more consistent. “I’d love to be consistent for seven innings. If we would do that, we’re really dangerous,” Sellars said. “We were only relevant offensively for the last two innings. We went from being down 8-1 to being up 9-8 in the blink of an eye. Offensively, we’re capable of doing that. I thought Saige did a good job giving us a chance in the circle. Veterans is a really good team. They handle the bat really well. We saw them last year. They’re really good offensively and solid defensively. They just don’t have a dominant pitcher and we knew that coming in.”

The Lady Warhawks got on the board first in the top of the second. With one out, Emily Myers drew a walk from Schley County starter Saige Whaley. Jenna West then hit a ground ball to third baseman Perri DeVane. DeVane tried to get the force play at second, but her throw sailed over Kelli Rees’s head and into center field, allowing Myers to reach third. Haley Evans then hit a pop fly that Rees was unable to handle. Myers scored on the play and Evans reached second. Whaley was able to get Nicole Chavous to pop out for the second out, but Regan Stella reached first on a bunt single. Fortunately for Schley County, Whaley was able to get lead-off batter Jenna Thomas to hit into a fielder’s choice to end the threat. 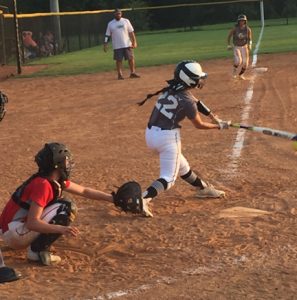 Schley County pitcher Saige Whaley drives in two runs in the bottom of the sixth to give the Lady Wildcats a 9-8 lead and, eventually, the win.
Photo by Ken Gustafson

Veterans scored three more runs in the top of the third. Kaylee Brown led off the inning with a walk, followed by a single from Trinity Thiel. Katherine Hickey hit into a fielder’s choice for the first out of the inning. The Lady Warhawks had runners on first and second with one out for Emily Myers. Myers drilled a pitch over the fence for a three-run home run to give Veterans a 4-0 lead.

The Lady Wildcats were able to respond in their half of the third. Tamia Kelley led off the inning with a single. Alexis Bradshaw hit into a fielder’s choice, advancing Kelley to second. Carmen Phillips singled, driving in Kelley for Schley County’s first run of the game. Nyiah Kelley then doubled to left field, advancing Phillips to third. The Lady Wildcats had runners on second and third with one out. However, Emily Campbell popped out and Landon Whaley grounded out to end the inning. 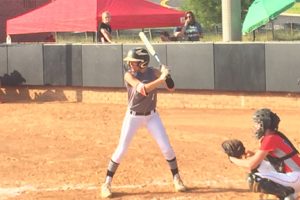 The Lady Warhawks scored two more runs on two hits and a walk in the top of the fourth to give themselves a 6-1 lead. They added two more runs in the top of the fifth. Emily Myers led off with a single. Then Jenna West hit a fly ball that Kelli Rees was unable to handle. Haley Evans then singled on a line drive to left field, scoring Myers. Nicole Chavous reached on an error, advancing West to third. However, Evans was thrown out at second base for the first out of the inning. Reagan Stella hit into a fielder’s choice, scoring West and giving Veterans an 8-1 lead.

However, the Lady Wildcats refused to quit. With two outs in the bottom of the fifth, Carmen Phillips singled, then stole both second and third base. Nyiah Kelley then drove in Phillips with an RBI single. With a runner on first and two outs, Emily Campbell belted a two-run home run to cut Schley County’s deficit to 8-4. All of this happened with two outs. The Lady Wildcats tried to keep the inning going as Landon Whaley singled to left field. However, her sister, Saige Whaley ,lined out to third base to end the inning.

In the top of the sixth, the Lady Warhawks were limited to one hit and scored no runs.

This gave Schley County the opportunity to engineer a come-back in the bottom of the sixth. Perri DeVane led off with a single. After Jade Sellars popped out, Tamia Kelley singled, advancing DeVane to second. Alexis Bradshaw reached on a bunt single, advancing DeVane to third and Kelley to second. Phillips then reached on a beautifully executed bunt single that scored DeVane. Kelley advanced to third base and Bradshaw advanced to second on the play. At this point, Schley County only trailed 8-5. 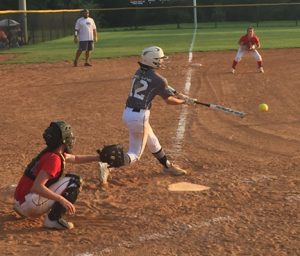 Schley County third baseman Perri DeVane at the plate. She went 1-for-4 and scored a run in the 9-8 win.
Photo by Ken Gustafson

Nyiah Kelley then executed Schley County’s third bunt single in a row, scoring Tamia Kelley. Bradshaw advanced to third and Phillips advanced to second on the play. The Lady Wildcats were within two runs, trailing 8-6 with just one out.

Landon Whaley struck out for the second out. It was up to Saige Whaley to come through. With the bases loaded and two outs, Whaley drilled a double into left field, scoring Phillips for the tying run and Nyiah Kelley for the go-ahead run. The Lady Wildcats had come back from seven runs down to take a 9-8 lead. DeVane ended the inning by grounding out, but Schley County had the lead going into the top of the seventh. All they needed was three outs to complete the come-from-behind win.

Saige Whaley was still in the game pitching for Schley County. She got Madison Bussell to ground out for the first out. The next batter walked, then advanced on a fielder’s choice. The Lady Warhawks had a runner in scoring position with two outs. However, Whaley got Reagan Stella to pop out to third baseman Perri DeVane to end the game and complete the come-back victory for the Lady Wildcats. 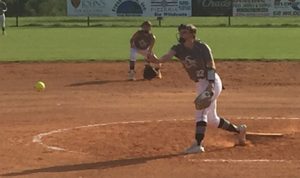 Saige Whaley went the distance in the circle. She gave up eight runs on eight hits. Five of those runs were earned. She walked four and struck out none.

Veterans pitcher Emily Myers went 2-for-3 at the plate. She drove in three RBIs and scored three runs. In the circle, Myers pitched six innings. She gave up nine runs on 14 hits. Six of those runs were earned. She walked one and struck out four.