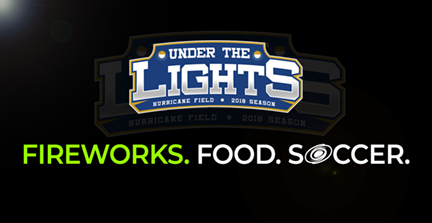 GSW will be playing the first-ever home soccer match under the lights on Wednesday, September 5, at 7 p.m. Photo by GSW

Festivities begin with a street party at 6 p.m. on GSW University Dr. adjacent to Hurricane Field. Grills will be fired up and food will be provided by the GSW Grub Club. At about 6:45 p.m., pre-match activities will include the unveiling of a “refreshed” Surge (the GSW mascot) and an official ribbon-cutting ceremony on the field with the Sumter County Chamber of Commerce. The official game ball will be flown in by an Air Evac Lifeteam 86 helicopter before the Hurricanes host Brewton-Parker College at 7 p.m. Admission is free.

“Playing the first night of soccer in GSW school history is the culmination of a lot of hard work from numerous groups on campus and in the community,” GSW Athletic Director Mike Leeder said. “The ability to provide an enhanced experience for our fans was the vision of our athletic department, and with the support of university leadership, it will happen on September 5.”

Hundreds of GSW giveaway items will be handed out throughout the evening. A fireworks show will follow the final whistle at approximately 9 p.m.

“We hope to bring the campus community and the Americus community together by adding lights to this facility and provide an additional opportunity for members to meet, interact and build camaraderie while strengthening school pride,” Leeder said. Leeder went on to say that playing games at night, when temperatures are cooler, should be more conducive to participation. 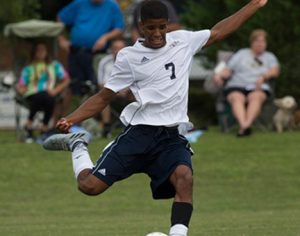 Senior Jonathan Sayers, along with his GSW teammates, will be participating in the school’s first home soccer match under the lights on Wednesday, September 5.
Photo by GSW

GSW soccer players are excited about what the September 5 match represents as well. “Every day we go by the field and see the lights and the progress on the field, it provides extra motivation,” fifth-year senior Nick Bottka said. “We’re grateful for what GSW President, Dr. Neal Weaver and the athletic department have done. This will help boost our confidence and the program’s competitiveness moving forward.”

GSW added men’s and women’s soccer as intercollegiate programs in 2004. All home matches have been played during daylight hours. The lighting project is scheduled to be completed by the end of August.

For the Lady Canes, their first game under the lights in their program’s history will be the following Wednesday night, September 12, against Middle Georgia State. Kickoff is scheduled for 7:30 p.m.