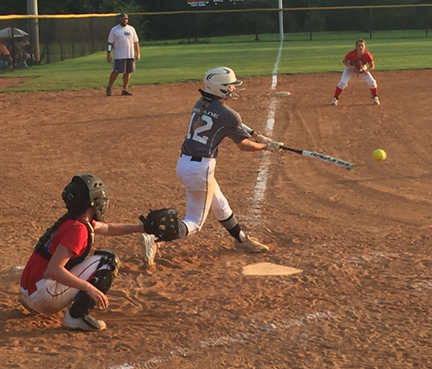 Perri DeVane went 3-for-3 and drove in an RBI in Schley County’s loss to Perry. ATR Archive

PERRY – The Schley County softball team lost a hard-fought, high-scoring game against the Lady Panthers of Perry on Thursday, August 16. With the game tied at 10-10 going into the bottom of the fifth, Perry’s Allison Peavy singled on a 3-and-1 count, driving in two runs. This was the beginning of a six-run explosion for the Lady Panthers. It was the key factor in the Lady Panthers’ 20-12 win over Schley County at Perry High School.

Schley County got off to a good start by scoring two runs in the top of the first. Alexis Bradshaw singled to open the game. Carmen Phillips hit into a fielder’s choice, advancing Bradshaw to third on the play. Nyiah Kelley then hit a double to center field, scoring Bradshaw and giving the Lady Wildcats a 1-0 lead. Kelley then advanced to third base on a passed ball. Emily Campbell was hit by a pitch, putting runners at first and third with one out. Campbell then stole second, followed by a fielder’s choice by Landon Whaley. Kelley scored on the play and the Lady Wildcats had a 2-0 lead.

Schley County scored three more runs in the top of the second to give themselves a 5-1 lead. DeVane led off with a double, followed by a single by Jade Sellars. Maddie Tobin came in as a courtesy runner for DeVane. Tobin advanced to third on the single by Sellars. Tamia Kelley then drove in Tobin to give the Lady Wildcats a 3-1 lead. Bradshaw then drove in Sellars on an RBI single and Kelley advanced to third on the play. Carmen Phillips then singled to center field, driving in Kelley and giving the Lady Wildcats a 5-1 lead going into the bottom of the second.

However, the Lady Panthers exploded for six runs in their half of the second inning. With one out, Miranda Lawhorn was hit by a pitch. Lawhorn then made it all the way to third on a passed ball and a wild pitch. DeVane then walked Caley Benitez, and Perry had runners at first and third with one out. DeVane then walked Sammie Carter to load the bases. DeVane was then replaced by relief pitcher Saige Whaley for Schley County. Terra Odom then drove in a run on a sacrifice fly. Benitez advanced to third on the play. The Lady Panthers had runners at first and third with two outs.

Alli Rae Dykes then hit a double, driving in Benitez and cutting Schley County’s lead to 5-3. Abby Usery then reached on an error by Nyiah Kelley. This scored two runs for Perry, tying the game at 5-5. Allison Peavy then belted a two-run home run to give Perry a 7-5 lead.

Schley County scored two runs in the top of the third to tie the game at 7-7. Saige Whaley was able to hold Perry scoreless in their half of the third inning. Each team scored three runs in the fourth to tie the ball game at 10-10. Things got off to a good start for Schley County in the top of the fifth. Tamia Kelley reached on a walk and Bradshaw was hit by a pitch, putting runners at first and second with nobody out. Both Kelley and Bradshaw advanced to third and second on a passed ball. The Lady Wildcats had a golden opportunity to score runs with nobody out. However, Carmen Phillips hit a line drive right at Perry pitcher Reagan Hughes, who caught it and threw to third base, doubling off Kelley. It was a double play, and Schley County had a runner at second with two outs. Unfortunately for Schley County, they were unable to score any runs in this inning as Nyiah Kelley flew out to end the inning.

That double play proved to be costly as Perry struck for six more runs in the bottom of the fifth. Saige Whaley was still pitching for Schley County. With one out, she walked Sammie Carter. Then Terra Odom reached on a bunt single, advancing Carter to second. Dykes then hit into a fielder’s choice, advancing Carter to third and Odom to second. Abby Usery was intentionally walked, loading the bases for Allison Peavy. Peavy then singled, scoring Odom to give Perry an 11-10 lead. Reagan Hughes then reached on an error by Phillips, scoring Usery and advancing Peavy to second. Billie Simmons then belted a three-run home run to give the Lady Panthers a 16-10 lead.

Schley County tried to get back in it in the top of the sixth. Emily Campbell drew a walk to lead off the inning, then stole second. After Landon Whaley popped out to the pitcher, Saige Whaley drove in an RBI single to cut the deficit to 16-11. Maddie Tobin, who came in to run for Whaley,   advanced to second on an error by the Perry left fielder. DeVane then singled, advancing Tobin to third base. Jade Sellars then drew a walk, loading the bases for Tamia Kelley. Tobin

was at third. DeVane was at second and Sellars was at first. Kelley reached on an error by shortstop Sammie Carter. This allowed Tobin to score and the runners to move up.

That would be the last chance for Schley County. Perry scored four more runs in the bottom of the sixth. Three of those runs came off a three-run home run by Abby Usery.

Perri DeVane, who started in the circle for Schley County, pitched 1.1 innings. She gave up four runs on one hit. She walked three and struck out none. Saige Whaley came on in relief. She pitched 3.2 innings, giving up 12 runs on eight hits. Three of those runs were earned. She walked two and struck out two. Hannah Crawford was the third and final pitcher used by the Lady Wildcats. She pitched 0.1 innings, giving up four runs on four hits. Crawford walked none and struck out one.

Terra Odom went 3-for-3 for the Lady Panthers. She scored four runs and drove in one RBI. Abby Usery went 2-for-4, scoring four runs and driving in four. Reagan Hughes started in the circle for Perry. She pitched the entire game, giving up 12 runs on 13 hits. Eight of those runs were earned. She walked six and struck out none.

Schley County (2-1) will try to bounce back when they travel to Baconton, GA on Monday, August 20, to take on Baconton Charter. First pitch is scheduled for 5 p.m.