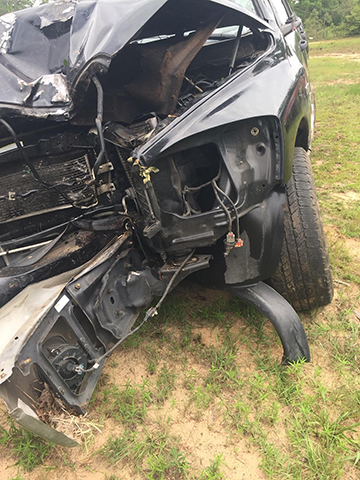 This the truck the child was riding in when it crashed.

ELLAVILLE — Lailah Carter Jordan, a 3-year-old child from Schley County, was protected from critical injury by an Evenflo Convertible car seat provided by the Georgia Child Passenger Safety Program and obtained through a grant from the Governor’s Office of Highway Safety by the Schley County Health Department.
Lailah, her grandparents, Curtis and Chris Carter, along with Miah Carter, 12, and D’Angelo Carter 15, were traveling south on Ga. Highway 240 approximately one mile north of Five Points in Marion County on July 7 when their 2008 Ram 1500 Longhorn Pickup lost control and entered a wooded area striking several trees. The truck received major frontal and side impact damage. The impact was so strong that it removed the entire front wheel assembly from the passenger side. All of the occupants were wearing seatbelts and received minor injuries, including seatbelt burns, a bruised shoulder and bruised ribs.
Lailah’s only injuries were shoulder belt burns from the harnesses of the car seat. The truck was totaled with frontal and impact side airbags deployed. Lailah’s car seat was mounted with the LATCH system using both lower anchors and a tether to secure the seat from any frontal movement.
John T. Greene, Georgia Family Connection coordinator, is the program administrator for the Child Passenger Safety Program in both Schley and Taylor counties. The car seat program in Schley County is now in its tenth year and has provided over 1,000 car seats to families in both counties.
“This is a great example of how the proper use and installation of the forward facing convertible car seat with lower anchors and tether protected Lailah,” said Greene. “Without the convertible car seat with harnesses, Lailah could have possibly received serious injuries from the impact,” he added.
For more information about the car seat safety program in Schley County, and to see if your child qualifies for a free car seat, call Kristy Smith, nurse manager, Schley County Public Health Department at 229-937-2208 or Georgia Family Connection, Schley County Collaborative at 229-937-5334.