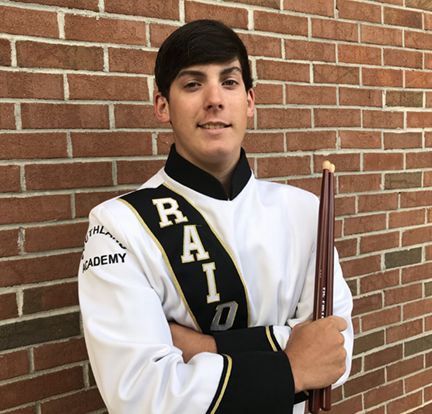 AMERICUS – This Friday, August 24, the Southland Academy football team will take the field for their 2018 season opener against Southwest Georgia Academy, but the football team won’t be the only ones gracing the pitch at Harvey Simpson Stadium.

At halftime of this game, as they will be doing every Southland game, the Southland Academy Marching Band will be performing. One of the band members, Drum Captain Ryan Driver, sat down with the Americus Times-Recorder to describe his love for music, in particular, playing the drums. Driver, a junior, plays the tenor drums in the band.

“I got my first drum set when I was five years old,” Driver said. “My brother use to play football at Southland. I would come and sit beside the band. I’ve always wanted to play the drums all of my life.”

Ryan Driver, the son of Thomas and Kim Driver, first joined the band back in Seventh Grade. Back then, he was playing the bass drum, but he also likes to play the guitar. Southland’s marching band consists of band members from seventh through 12th Grade.

Musicians such as trumpeters, flutists, those who play the trombone and drummers like to play many songs, but they all have a favorite song they like to play. Driver has his as well. “I like to play a song called Jig. It’s just a drum line only,” Driver said.  “The song features the tenor drums. He (Driver) has a solo in it,” Southland Band Director Rob Ivey said. “That’s why he likes it so much. He gets to shine.”

Other than playing drums and the guitar, Driver likes to go hunting and fishing. Driver remembers the day that he killed his first deer. “My Dad and I were on our way to the deer stand. There were some pine trees that you have to walk through, and the deer stand was on the other side of the pine trees,” Driver said. “We were almost through the pine trees and I stopped and saw a deer. I thought it was a Doe. I got my gun ready and I was about to shoot it. Then it lifted its head up from eating, and I saw that it was a Buck. I said ‘Dad, it’s a Buck’. I was shaking. I couldn’t shoot. I shot the first time and I missed. Then it started running towards us, so I shot it again and that’s when I killed it. I was 11-years old.”

As far as academics are concerned, Driver’s favorite subject is History, in particular, US History, especially dealing with World War II. He also likes Math to a certain extent.

In addition to performing at halftime during football games, Director Ivey said that the Southland Marching Band performs in parades such as the Andersonville Historic Parade, the Americus Veterans Day Parade and the Americus Christmas Parade. “We also have a spring concert in late April,” Ivey said. The band does not participate in any competitions mainly because many band members are also involved in other things, such as sports. “We have a band that is made up of students that do other things,” Ivey said. “They run Cross Country. They play softball and they play football. We’re sharing our kids with a lot of different things,” Ivey said. “A lot of practices are that way too. They can come to band practice and go to softball practice and go to cross country practice.” Driver added that some members of the band are in the GISA All-State Band. That is done in January. “It’s like All-State for public school, but it’s private school,” Ivey said. Ivey went on to say that the best band members from around the state that are in Georgia Independent Association (GISA) schools are selected to be in the GISA All-State Band. That band performs a concert in January. “They practice for a weekend, and at the end of the weekend, they put on a concert,” Ivey said. “Ryan has been accepted into the All-State Band for the past two years.”

Driver said that if his grades are good enough, he would like to be in a college marching band, such as the University of Georgia Redcoat Marching Band.

Other than Director Ivey, Ryan Driver says that his other favorite teacher at Southland is Susan Welch, who teaches US History and is the varsity cheerleading coach.

As far as his marching position, Driver will be in the middle of the band on Friday nights. There is no drum major in Southland’s band, but Director Ivey hopes that one day, that will change. “One day maybe. We need to grow a little bit before I hand it over to somebody,” Ivey said. “I want it to get a little bigger before I step off the field and give it to somebody else.”

For those going to Southland football games on Friday night, during the band’s halftime performance, if one looks carefully, one will see Drum Captain Ryan Driver playing five tenor drums as he marches with the band.