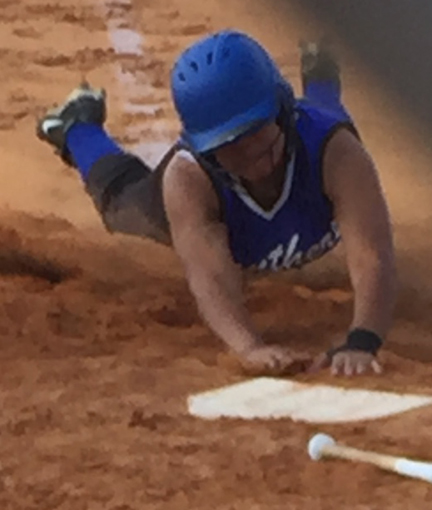 AMERICUS – For most high school student-athletes, to get to the varsity level requires developing their skills at the junior varsity level. These of the players of tomorrow. Furlow Charter is a relatively new school that currently goes up to 11th Grade. They will have their first graduating class in the spring of 2020.

Most of the sports at Furlow are JV-level sports, including girls’ softball. The Lady Falcons took on Americus-Sumter Wednesday, August 22, at the ASH softball complex. In a very high-scoring affair, Furlow Charter defeated the Lady Panthers 25-19.

Furlow scored six runs in the top of the first inning off ASH starting pitcher Tiffany O’Neal. However, the Lady Panthers responded with five runs of their own in the bottom of the first off Furlow starting pitcher Annisa Retana. While O’Neal and Retana tried their best to hit the strike zone, both pitchers struggled with control, walking several batters and hitting others.

The Lady Panthers scored two more runs in the bottom of the second to take a 7-6 lead. Both Garcia and India Hughley scored those two runs. 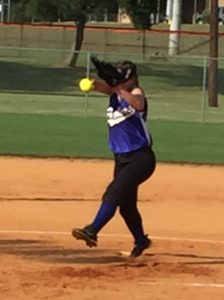 Americus-Sumter pitcher Taylor Garcia on the mound for the Lady Panthers.
Photo by Ken Gustafson

The Lady Falcons scored three more runs in the top of the third to take a 9-7 lead. Shortstop Jaylynne Ruckman hit a double, driving in an RBI. In spite of giving up three runs, Garcia was able to strike out three batters in this inning.

Americus-Sumter responded by scoring two more runs to tie the game at 9-9. Tiffany Goodman drew a walk and Adrian Anthony was hit by a pitch. DeAsia Ford and Brianna Pope both drew walks. As a result of a wild pitch, both Goodman and Anthony scored.

In the top of the fourth inning with one out, Furlow’s Kailey Garcia drew a walk. After Diya Patel struck out, their next four hitters: Jodi Mattair, Jaelyn Wynn, Anissa Retana and Kendall Robinson were all hit by a pitch. Garcia and Mattair both scored to give the Lady Falcons an 11-9 lead. 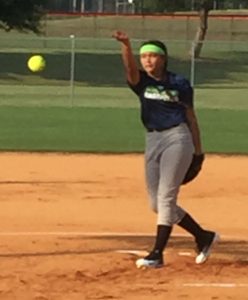 Furlow Charter’s Annisa Retana started in the circle for the Lady Falcons.
Photo by Ken Gustafson

The Lady Panthers responded in their half of the fourth. With two outs, Goodman drew a walk. Then Adrian Anthony doubled home an RBI to cut the deficit to 11-10. DeAsia Ford reached on an error, allowing Anthony to score. The game was tied 11-11 going into the fifth inning.

In the top of the fifth, Furlow Charter scored five runs, mostly as the result of walks and hit batsmen. Americus-Sumter responded by scoring four runs in their half of the fifth. With one out, India Hughley drew a walk, followed by Sophie Lorens. After Taniya Turner hit into a fielder’s choice for the second out, Natasha Jackson was hit by a pitch. Tiffany Goodman then drew a walk. In total, Hughley, Lorens, Jackson and Goodman all scored. At this point, Furlow Charter led 16-15 going into the sixth. 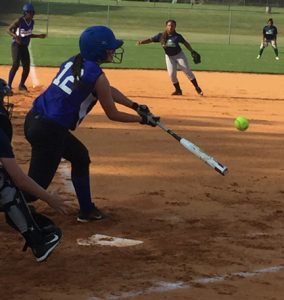 Furlow Charter scored four more runs in the top of the sixth. Two of those runs were scored as a result of a two-RBI double by Jaylynne Ruckman. Americus-Sumter responded with a run in the bottom of the sixth. DeAsia Ford led off the inning by reaching on an error by the Furlow third baseman. The error allowed Ford to reach third. Brianna Pope then hit into a fielder’s choice, scoring Ford. However, that would be all of the scoring the Lady Panthers would do in the sixth. 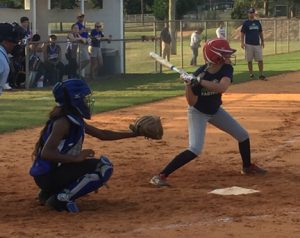 Furlow Charter’s Jaelyn Wynn at the plate for the Lady Falcons.
Photo by Ken Gustafson

At this point, Furlow Charter led 20-17. The Lady Falcons scored five runs in the top of the seventh, increasing their lead to 25-17. Americus-Sumter tried to come back in the bottom of the seventh. They scored two runs, but it would not be enough as Furlow Charter went on to win 25-19.

“The name of the game is to throw strikes, hit the ball, catch the ball, make the plays,” Furlow Charter Head Coach Jay umplebey said. “One thing both sides didn’t do was give up. They fought to the end. The team who makes the fewest mistakes wins.”

For Americus-Sumter coach Coleman Price, it came down to pretty much one thing: pitching. “It comes down to pitching,” Price said. “When you don’t throw strikes and let the defense work behind you, it’s hard to win ball games. We’ve got a long way to go with pitching. We’re young.”