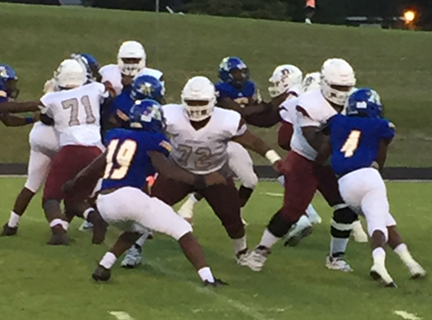 AMERICUS – The Americus-Sumter Panthers were poised and ready to get the bad taste out of their mouths from last week’s 17-14 double-overtime loss to Crisp County in the season opener.

Friday night, August 24, was the home opener for the Panthers at Alton Shell Stadium. It was Sumter County Night, and the Panthers delivered with a 43-7 thrashing of Region 1-AAAA opponent Dougherty. This was Larry Harold’s first victory as the head football coach of Americus-Sumter.

“Our defense played lights out,” Coach Harold said. “I want to thank Coach Oliver’s staff. They’re doing a great job. On offense, we had to find our nitch. KJ was a bit off. We had to settle him down and he played well in the second half. Dougherty coach Damien Gary is doing a great job. They have large numbers. They’re big. They’re physical and we had to wear them down. This was a good win because we are 1-0 in the region 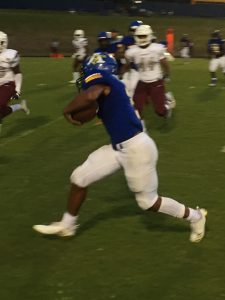 Things started off rough for the Panthers. On fourth down, they had the ball deep in their own territory and were forced to punt. The snap was high, and the ball went off punter Farhan Adballah’s hands. The ball was intercepted by a Dougherty player and was run back for a touchdown. The extra point was good and Dougherty had an early 7-0 lead.

The Panthers were able to move the ball down into Trojan territory thanks to a 50-yard run by Montrellis Wilson. The Panthers had the ball down at the Dougherty eight-yard line. However, a series of penalties and a sack on ASH quarterback KJ Harvey stopped the drive.

However, the defense made a play late in the first quarter. Dougherty had the ball down at their own one-yard line. Americus-Sumter linebacker Chase Jones tackled the Dougherty running back in the end zone for a safety, making it 7-2 Dougherty.

On the Panthers’ next possession, Wilson made another long run down into Dougherty territory. ASH running back Christopher Lundy made a productive run for yardage, followed by another carry by Wilson. However, as the Panthers were moving the ball toward the goal line, the Dougherty defense caused a fumble and the Trojans recovered the ball.

Later in the second quarter, Dougherty quarterback Justin Moore’s pass was intercepted and run back for a touchdown by Jacoby McCuller. Kevin Abarca’s extra point was good, and the Panthers had a 9-7 lead. 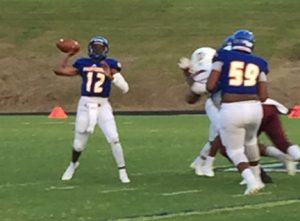 Americus-Sumter quarterback KJ Harvey about to throw the football against Dougherty.
Photo by Ken Gustafson

Americus-Sumter stopped Dougherty on offense again and got the ball back. KJ Harvey moved the offense down to the Dougherty 15-yard line. Then Montrellis Wilson scampered 15 yards for a touchdown. Kevin Abarca’s extra point attempt was no good, but the Panthers had a 15-7 lead late in the first half.

Then with 18.5 seconds left before halftime, the Panther defense made another huge play. ASH forced a fumble and Henry Wilson ran the ball back 41 yards for a touchdown. Larry Harold decided to go for two. Harvey completed a short pass to Quevoluia Willoughby, completing the two-point conversion and extending the Panthers’ lead to 23-7 at halftime.

The Americus-Sumter defense stopped Dougherty on offense and got the ball back. They moved the ball into the Trojans’ territory. Then Harvey connected with wide receiver Sam Crumbley for a 38-yard touchdown pass. Alexis Vasquez was brought in to kick the extra point. Unfortunately, his PAT was no good, but the Panthers would go on to win 43-7.

Americus-Sumter has next Friday off. However, they will host one of the top teams in the state, Lee County, on Friday, September 7. Kickoff is scheduled for 7:30 p.m.