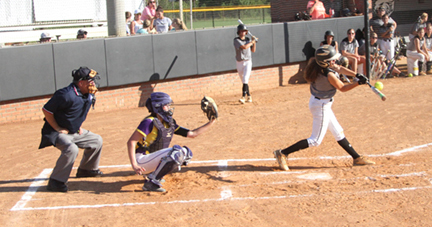 ELLAVILLE – The Lady Wildcats softball team scored five runs in the bottom of the fifth inning on their way to a 10-2 victory over Mount de Sales Academy on Wednesday, August 29, at Schley County High School.

Saige Whaley was dominant in the circle for Schley County. She pitched six innings, allowing one run on two hits. She walked one batter and struck out four.

Mount de Sales scored the game’s first run in the top of the first inning. Henderson Hurdle led off the game with a single. Heartly Nepreux then singled and tried to stretch it into a double, but was thrown out at second base. Hurdle advanced to third on the play. Jordyn Partain then drove in Hurdle on a sacrifice fly.

The Lady Wildcats responded in the bottom of the third. Jade Sellars reached on a bunt single, then stole second base. Tamia Kelley then reached on an error. Schley County had runners at first and second with nobody out at that point. Sellars advanced to third base on a passed ball and Kelley advanced to second on the same pitch. Then Alexis Bradshaw flew out to center field for the first out of the inning. Carmen Phillips then doubled to left field, scoring two runs and giving Schley County a 2-1 lead.

After Nyiah Kelley popped out to third base, Phillips advanced to third on another passed ball. Emily Campbell hit a double to left field, scoring Phillips. Mount de Sales got one run in the top of the fifth, but the Lady Wildcats exploded for five runs in their half of the fifth to put the game away. Bradshaw led off the inning with a bunt single, then advanced to second on a bad throw. Phillips then reached on a bunt single, advancing Bradshaw to third. Nyiah Kelley also executed a bunt single, scoring Bradshaw. Kelley advanced to second on the play and Phillips advanced to third. Emily Campbell popped out to second base for the first out of the inning. Saige Whaley then bunted into a fielder’s choice, scoring Phillips and advancing Kelley to third base.

Kelli Rees was brought in to be a courtesy runner for Whaley. Perri DeVane drove in an RBI single, scoring Kelley and advancing Rees to third. At this point, Schley County had a 6-2 lead.

DeVane then stole second. Then Rees scored on a wild pitch. DeVane advanced to third on the same pitch. Landon Whaley then drew a walk, putting runners at the corners with one out.

Jade Sellars drove in DeVane on a fielder’s choice. That completed the five-run inning.

Whaley held the Mount de Sales offense scoreless in the top of the sixth. The Lady Wildcats scored two more insurance runs in the bottom of the sixth to make the final score 10-2.

For Mount de Sales, they were led offensively by Henderson Hurdle. Hurdle went 2-for-3 and scored a run. Starting pitcher Jordyn Partain pitched five innings for the Lady Cavaliers. She gave up 10 runs on 11 hits. Six of those runs were earned. She walked two and struck out seven.