hown are two of the six firearms confiscated in relation to the investigation of a weekend shooting in Americus.

AMERICUS — At 3:21 a.m. Saturday, Aug. 25, officers of the Americus Police Department were dispatched to Phoebe Sumter Regional Medical Center in reference to a gunshot victim. The victim, Brandon E. Pope, age 32, had been shot multiple times, and was being treated by hospital staff. 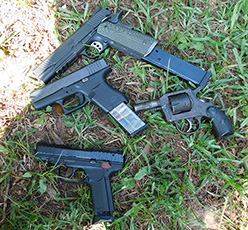 Shown are four of the six firearms seized by police during the investigation into a weekend shooting in Americus. Two of the guns confiscated were reported stolen.

Investigation into the shooting led APD personnel to 133 Hosanna Circle in Americus, where officers executed a search warrant on the residence. Evidence related to the shooting was collected and included six firearms, two of which are confirmed as stolen.

The following suspects have been charged in this incident, as the investigation continues.

Deeron Z. Hicks, 18, of 133 Hosanna Circle is charged with aggravated assault, possession of a firearm During the commission of a felony, theft by receiving stolen property and tampering with evidence.