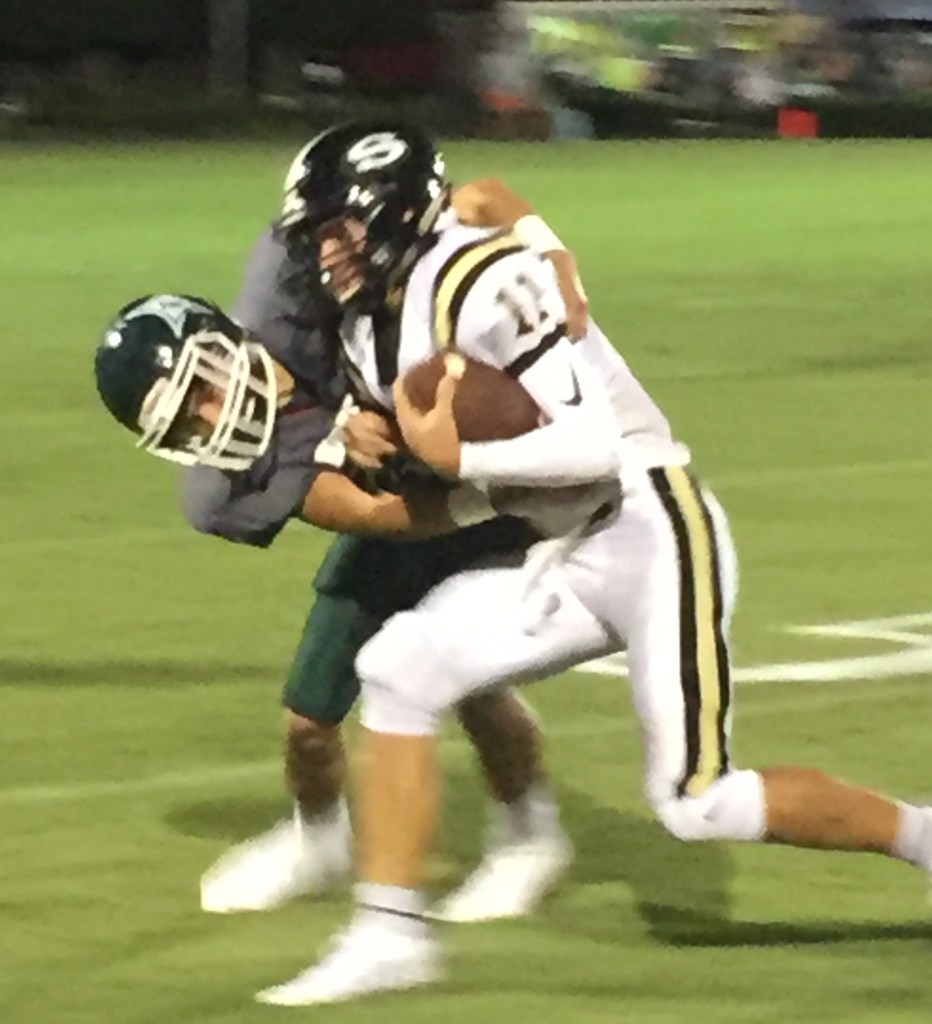 PERRY – In an absolute classic display of guts and heart, the Southland Raiders overcame six turnovers and came from behind to beat Westfield 15-14. The Hornets were driving for a winning field goal with 35 seconds left. However, Southland defensive back Chandler Studdard stripped the ball from Westfield quarterback Christian Corbett and Clay Owens recovered it to seal the hard-fought victory. “They were running an option quarterback keeper. The quarterback was going to pitch it. I was just there at the right time and the right place,” Studdard said.

Southland Head Coach Rod Murray commented that everyone should just step back, take a deep breath and think about how hard it was for the Raiders to get this victory. “We can’t be any more proud of our kids. That’s what is going to help them make it in the real world,” Murray said. “I want everyone to slow down and think about how hard of a job it was for both of these teams to lay it out there on the line like that and fight to the end. Our kids expect something good to happen and never quit”

Murray was extremely proud of the way his defense played and he was proud of how the defensive coaches coached them up. “I thought the defensive staff did a great job getting thse guys ready,” Murray said. “We did a good job of fitting in the running lanes and controlling the option like we had planned to.” 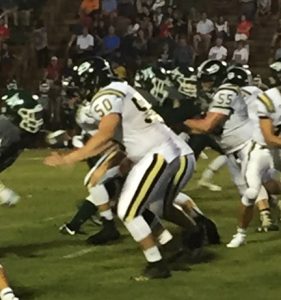 Southland won the toss, but deferred to the second half. The Raiders were able to hold the Hornets on offense and Westfield was forced to punt. However, punt returner Freddie Updike fumbled the ball on the return. The ball was fumbled around towards the end zone and recovered by Gage Locke for a Westfield touchdown. The PAT was good, and Westfield had an early 7-0 lead with 8:53 to go in the first quarter.

The Southland defense held westfield again on offense and got the ball back. The Raiders had the ball around their own 32-yard line. However, running back Clay Owens fumbled, and the ball was recovered by Westfield. The Hornets tried to make a drive and were able to move the ball down to the Southland 29. However, the Raider defense forced a 4th-and-9 situation. The Hornets failed to convert on 4th down, and Southland got the ball around their own 30-yard line. A couple of plays later, quarterback Landon Law completed a pass to his brother, Luke Law, for 17 yards. However, the turnover bug hit the Raiders again as Owens fumbled for the second time. The Hornets took advantage by moving the ball down into the red zone (inside the Raiders’ 20-yard line).

Then Westfield quarterback Christian Corbett connected with Hunter Spence for a touchdown. The extra point was good and the Raiders found themselves down 14-0.

The Raiders were moving the ball on offense and moved it into Westfield territory. However, Law’s pass was intercepted by Westfield defensive back Clay Walton. 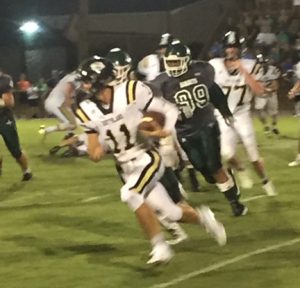 However, the Raider defense rose to the occasion. James Griffin made a huge sack for a loss. Then Corbett’s pass was intercepted by Southland defensive back Adam Smith. The Raiders had another chance to march down and score. They did just that. Law through a 36-yard pass to Freddie Updike inside the 10-yard line.  A couple of plays later, on third-and-goal from the 3, Owens scored a touchdown. The extra point by Zane Hines was good and the Raiders were back in the game, tailing 14-7 at halftime. In spite of the four turnovers in the first half, the Raiders were still in the game because of the outstanding play of their defense.

The Raiders got the ball to start the second half. Landon Law made a nice nine-yard run down across the Southland 40. However, on the next play, Law’s pass was intercepted by GaranDaw. Daw ran the ball all the way back for the touchdown. However, a block in the back was called on Westfield after the interception, nullifying the touchdown. The Riders were able to force a third-and-two situation for Westfield. The Raiders stopped Westfield on offense and got the ball back.

Southland’s offense moved quickly down the field, thanks to runs by Law and Clay Owens. The Raiders were able to move the ball down to the Westfield 20. Then Landon Law found Luke Law in the end zone for a touchdown. The Raiders decided to go for two. Clay Owens scored the two-point conversion, giving the Raiders a 15-14 lead.Westfield struck back with a kickoff return for a touchdown by Garan Daw. However, the touchdown was called back due to a block in the back penalty on the Hornets. The Raider defense, as they had done all night, made another stop against the Westfield offense.

The Hornets decided to go for it on 4th down, but Corbett’s pass was incomplete and the Raiders took over on downs at their own 30-yard line.Unfortunately for Southland, the turnover bug reared its ugly head again as the Hornets forced another fumble and recovered it. This gave them a chance to drive for the winning field goal. Westfield steadily marched the ball into Southland territory. They were driving for a winning field goal. However, with about 35 seconds left, Quarterback Christian Corbett was stripped of the ball by Chandler Studdard. Studdard accidentally kicked the ball and it went about 30 yards, but Clay Owens was there to recover it and seal the victory for the Raiders.

Southland Academy will try to stay unbeaten when they host Loganville Christian next Friday night, September 7. Kickoff is scheduled for 7:30 p.m