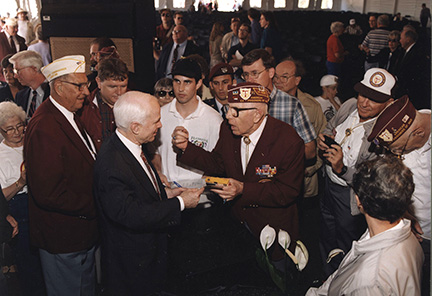 Sen. John McCain is shown talking with former prisoners of war when he was keynote speaker at the dedication of the National Prisoners of War Museum at the Andersonville National Historic Site in April 1998.

ANDERSONVILLE —  The National Prisoner of War Museum, located at Andersonville National Historic Site, will participate in a coordinated, nationwide playing of Taps to honor the memory and service of former prisoner of war and U.S. Sen. John McCain.

At 2 p.m. EST on Sunday, Sept. 2, when the funeral for McCain begins, buglers across the nation will simultaneously play Taps at various locations. Mike Saliba, a local Navy veteran and bugler of Americus, will play Taps in front of the National Prisoner of War Museum as part of this coordinated effort. McCain spoke at the grand opening of the museum in 1998.

While serving as a Naval aviator, McCain was shot down over Vietnam on Oct. 6, 1967. Both of his arms and one of his legs were broken when he was shot down. He was captured and taken to the infamous “Hanoi Hilton” prison, where he endured five and a half years of imprisonment, beatings, and torture as a prisoner of war. His treatment at the hands of the enemy caused permanent damage, and he would never again be able to lift his arms above his shoulders. McCain was finally released in March 1973.

The public is invited to National POW Museum to honor the passing of former prisoner of war and U.S. Senator John McCain. Entry into the park and all activities are free.