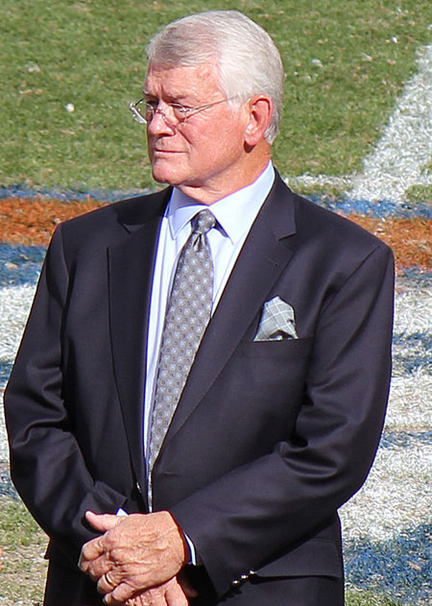 Former NFL head coach Dan Reeves will be the honorary captain and will do the coin toss at the Americus-Sumter Panther’s home game against Shaw on Friday, September 14. Photo by Wikipedia

AMERICUS – Legendary former Atlanta Falcons and Denver Broncos Head Coach Dan Reeves will be the honorary captain and will do the coin toss before the Americus-Sumter Panthers take on Shaw Friday night, September 14, at Alton Shell Stadium.

According to Wikipedia, Reeves, an Americus native, played football, baseball and basketball for Americus High School in the late ‘50s and early ‘60s. He suffered a broken collar bone during his senior year in 1961. As a result, only the University of South Carolina was interested in offering him a football scholarship. Interest from other schools came later after he won the MVP trophy at the Georgia High School Football All-Star Game. However, he stuck with his original commitment to play for the Gamecocks. Reeves was also selected to the All-State Basketball Team in 1961.

Reeves was a three-year starter at quarterback for the Gamecocks from 1962-1964. During that period, he set 10 school records. Even though South Carolina lost to Nebraska 28-6 in 1964, Reeves passed for 348 yards in that game. He left Columbia as the leading passer in Gamecock history, accumulating 2,561 yards passing. He scored 16 touchdowns and had three games with 100 yards rushing.