New K-9 on duty in Americus 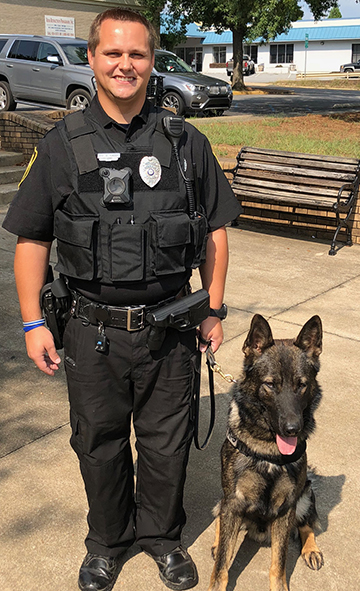 AMERICUS — The One Sumter Economic Development Foundation recently donated a new drug dog, its training and the specially outfitted vehicle for the K-9 officer/handler to the Americus Police Department (APD) which had been without such assets for several years.
Officer Chris Gaddy, the K-9 officer/handler, and the K-9 officer Vonn started on duty on Aug. 23.
Gaddy graduated from training on Aug. 17 at the Alabama Canine Law Enforcement Training Center in Northport, Ala., just north of Tuscaloosa. The four-week, 160-hour training course prepared Gaddy to handle his K-9 Vonn, a full-blooded German Shepherd.
Gaddy, 30, an Andersonville native, joined the APD in December 2016. He told the Times-Recorder that he has always been interested in getting drugs off the street and when the new K-9 was made available, he saw it as an opportunity to achieve that goal. He said he had aspired to become a law enforcement officer since he was a child. He first considered detective work, he said, but as he got older, his path changed when he found, through a friend who also works for the APD, that the department was hiring.
Vonn, the 2-year-old German Shepherd, was born and bred in the Czech Republic, according to Americus Police Chief Mark Scott, who said Alabama Canine imports lots of dogs from there and trains them. The German Shepherd is still mainly bred in Europe, and imported here for use as trackers, drug sniffers, explosives sniffers, or patrol dogs. “Most of the German Shepherds you see who are K-9s are not domestically bred; they’re imported,” Scott said. Although a highly intelligent breed, these German Shepherds are bred specifically to be trained for law enforcement.
When Gaddy reported for his training, Vonn had already had some training, but they both worked together to form a bond. “The goal is to develop a bond and work together side by side,” Gaddy said.
Vonn actually lives with Gaddy, his wife and two children, ages 4 and 9. When he’s not working, Vonn likes to play with the kids, Gaddy said. He said the Gaddy home is fenced in and within the fence is Vonn’s kennel, where the dog sleeps. He is let out to run around and play each day.
Scott said that Vonn is a friendly dog, on and off duty. “He’s a drug and tracking dog,” he said. “He’s not trained for aggression. He’s not a biting dog … He’s an excellent drug sniffer and he’s a very good tracker. He’ll follow a trail for miles.”
Gaddy learned during his training that K-9s have an elevated sense of smell. He explained it this way: “If you (a human) walks into a kitchen and there’s a pot roast going on, you smell a pot roast. You don’t know what’s in the pot roast. But when the dog comes into the kitchen, they can smell the potatoes. They can smell the seasoning in the pot roast. They can break down everything that’s in that pot roast because their noses are so powerful.”
When tracking, for instance a missing person, Gaddy and Vonn would be dispatched to the last location the missing person had been seen. Using Vonn’s expertise for ecological ground surface detection, which means he can tell if the ground has been disturbed recently, once Vonn picks up a scent, he will continue, for miles and miles if necessary, as the chief said.
Though Vonn, like other tracking and drug dogs, has the IQ of a 2-year-old human, according to Gaddy, “they are smart but somewhat simple minded,” which is good for maintaining their focus when at work.
Vonn has already been used in demonstrations around town to showcase his skills. When this writer met him, Vonn was very friendly and wanted to lick her hands. He was told to sit by Gaddy, which he did. Scott said Gaddy will take Vonn around the streets of downtown to meet people during First Friday and at other venues and events around town. Gaddy and Vonn will do school programs, community programs such as the Citizens Police Academy, and will be a good public relations tool for the police department.
The chief also said it is their hope to add another K-9 officer and handler to the department within a year or two.
In a press release, Scott said that the assignment of this new K-9 Team serves as a “hallmark moment” for the Americus Police Department, as well as the One Sumter Economic Development Foundation. In 2017, One Sumter embarked on its final strategy for enhancing the image of Americus and Sumter County.
“Recognizing that safety, health, and overall welfare of Sumter County residents is essential to our community’s growth, the One Sumter Board of Directors launched the One Sumter’s Crime Initiative as a pivotal component of One Sumter’s comprehensive economic development strategy,” the release said.
The initiative seeks to support local law enforcement officials and to address the safety and public welfare of residents, businesses, and visitors to our community, in an effort to spur residential growth and economic vitality. In a response to stated needs of Sumter County’s law enforcement community, One Sumter committed to investing $45,000 toward the purchase of a K-9 drug and tracking search dog, related training for the K- 9’s handler and assigned officer, and to fully equip the necessary patrol unit. As a part of the partnership, Americus Veterinary Hospital and Dr. Kyler Crawford are donating one year of service and care for the K-9 at no cost to the APD.