Panthers get routed by Lee County 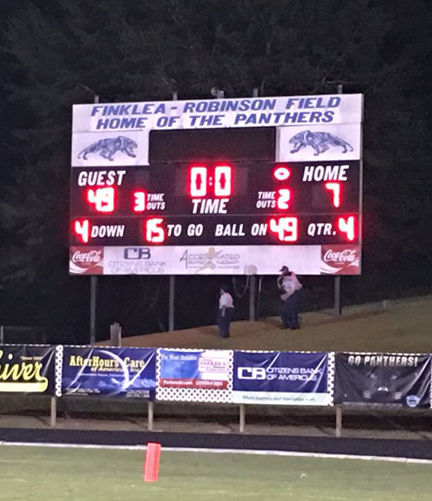 AMERICUS – Two weeks ago, the Americus-Sumter Panthers scored a resounding 43-7 win over Dougherty. The Panthers used the week off to heal up and to work on things in their game that needed fixing in hopes of pulling off a major upset over one of the best teams in the state: The Lee County Trojans.

However, Dean Fabrizio’s club was just too much for the Panthers to handle as Lee County thrashed Americus-Sumter 49-7 Friday night, September, 7, at Alton Shell Stadium.

The Trojans put up 21 points in the first quarter. Lee County quarterback Kyle Toole threw a 34-yard touchdown pass to Artavius Warren to put the Trojans on the board. Austin Beaver’s extra point was good, giving the Trojans an early 7-0 lead.

Lee County doubled their lead when running back Daveon Sanders scored from 15 yards out. The PAT was good and the Trojans led 14-0.

Sanders scored again when he caught a 47-yard pass from Toole. Beaver once again made the extra point, giving the Trojans a 21-0 lead.

The Panthers scored their only touchdown of the game when quarterback KJ Harvey found Montrellis Wilson for an eight-yard touchdown pass. Kevin Abarca’s extra point attempt was good, and the Panthers cut into the deficit 21-7 by the end of the first quarter.

However, it was all Lee County from there. Sanders scored his third touchdown of the game as he caught a 10-yard pass from Kyle Toole. Beaver’s extra point was good, extending the Trojans’ lead to 28-7.

The final touchdown of the game came in the third quarter. Jammie Robinson scored on a 40-yard punt return, making the final score 49-7 in favor of the Trojans.

The Panthers will try to regroup for their Region 1-AAAA game against Shaw next Friday night, September 14, at home. Legendary former NFL Coach Dan Reeves will be the honorary captain and will do the coin toss before the game. Kickoff is scheduled for 7:30 p.m.