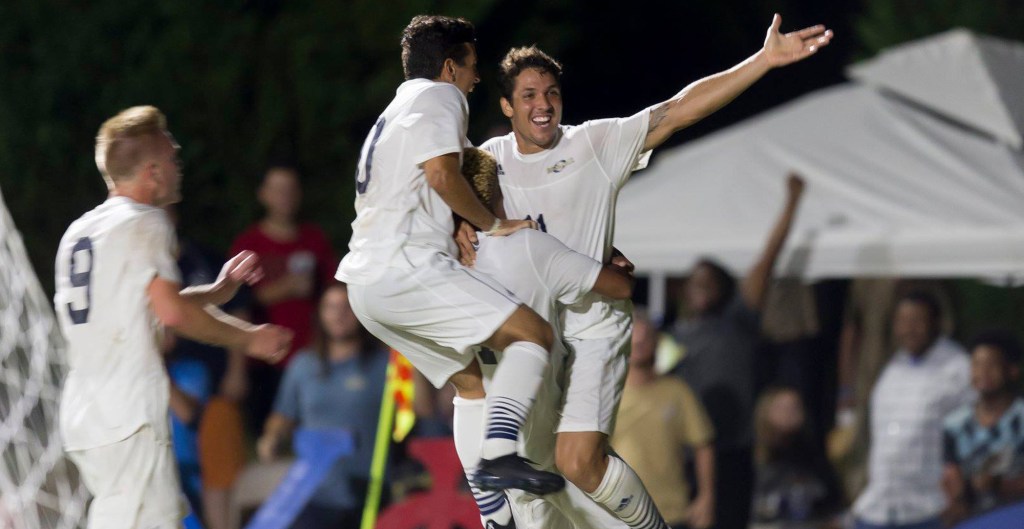 GSW’s Matheus Alves (11) celebrating with his teammates after scoring a goal against Brewton-Parker on Wednesday night, September 5. Alves scored one goal and tallied two assists in the win over Pensacola Christian. Photo by GSW

PENSACOLA, FL – The GSW Men’s Soccer Team scored four goals in the second half to earn a hard-fought 5-3 win over Pensacola Christian College on Saturday, September 8, at Eagle Field. It was the first-ever meeting between the two schools.

The Eagles regained the lead in the 51st minute on a goal by Riley Buchalski. The Hurricanes stormed back with two consecutive goals. Dylan Marshall got the equalizer when he forced his way to a loose ball and beat the PCC goalkeeper in the 58th minute for his second goal of the season. Jonathan Sayers gave the Hurricanes the lead in the 78th minute when he received a pass towards the left corner from Alves and drilled a shot inside the right post for his first goal of the season.

The Eagles fought back, however. Kendall Mullenix scored the equalizer on a bicycle kick to tie the match at 3-3. However, the Hurricanes earned a penalty kick in the 82nd minute on a foul whistled against PCC when one of their defenders took down Chris Avery in the 18-yard box. Alves stepped up and drilled the penalty, increasing his team-leading goal total to four.

Thiago Elias gave the Hurricanes the insurance goal they needed in the 88th minute off an assist from Sayers.

With the win, the Hurricanes improve to 2-1-1 on the season. Pensacola Christian drops to 0-4.

GSW outshot the Eagles 19-10 in the match and had an 11-5 edge in shots on goal. The Hurricanes held a 6-0 advantage in corner kicks and fouls were even at 15-15. The Hurricanes’ goalkeeper, Francesco Bazzano, made two saves. His counterpart, PCC’s Brent Konieczynski, had six saves.

The Hurricanes will try to continue their winning ways when they host Middle Georgia State on Wednesday, September 12. Kickoff is scheduled for 5 p.m.