Early goals too much to overcome for Hurricanes 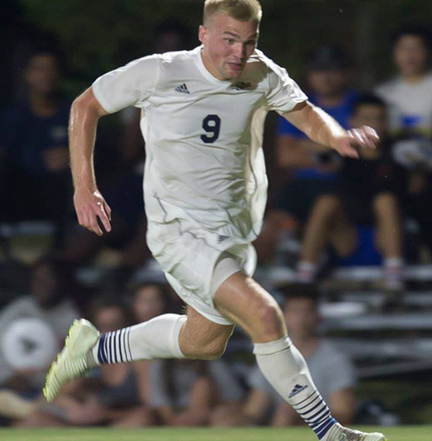 Junior Forward Dylan Marshall scored the only goal for GSW in their loss to Middle Georgia State. Photo by GSW

AMERICUS – The GSW Men’s soccer Team gave up a pair of goals in the opening 16 minutes of the match and fell to Middle Georgia State 2-1 under the lights at Hurricane Field on Wednesday, September 12.

With the loss, the Hurricanes’ two-game win streak was snapped. They fall to 2-2-1, while Middle Georgia State (1-5-1) picked up its first win of the season.

Kyle Jordan scored both goals for the Knights. The first one came in the 12th minute. Less than four minutes later, Jordan scored his second goal of the match off an assist from John Crawley.

Both sides created numerous chances to score over the next 71 minutes. Dylan Marshall finally broke through for the Hurricanes, scoring his first goal of the season by following up his own rebound off of the MGA goalkeeper in the 87th minute.

Both sides had two team saves in which defenders had to clear the ball off the line as their goalkeepers were beaten.

The Hurricanes finished the match with a 16-10 shots-on-goal advantage. They had a 5-3 edge in corner kicks and were whistled for three more fouls than Middle Georgia State (10-7).

The Hurricanes will host Talladega College on Saturday, September 15, at 7:30 p.m. It will be Youth Soccer Night and the second annual Wet & Wild Saturday. A pair of water slides, along with a dunk tank, will be on hand for the fans to enjoy free of charge.