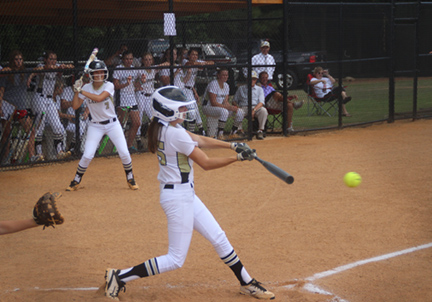 Brookland Weaver batting against Deerfield-Windsor. Weaver drove in an RBI in Southland’s 10-0 victory over the Lady Knights. Photo by Renae Kellam

AMERICUS – The Southland Academy Lady Raiders Softball Team kept Deerfield-Windsor off the scoreboard for the second time this season, beating the Lady Knights 10-0 on Tuesday, September 11, at Southland Academy.

Southland starting pitcher Rylan Youngdale pitched the entire game. She allowed no runs and only allowed three hits. She walked none and struck out one batter. Sara Beth Storey led the Lady Raiders’ attack by going 2-for-2 at the plate, scoring two runs and driving in three RBIs. Reese Roland went 2-for-3 at the plate and scored a run. 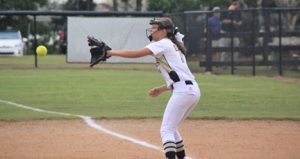 First baseman Reese Roland about to catch a ball at first base. Roland went 2-for-3 at the plate and scored a run against Deerfield-Windsor.
Photo by Renae Kellam

Southland scored one run in the first, three in the second and one in the third. However, the big damage came in the fourth inning when the Lady Raiders scored five runs. At the time, Southland led 5-0. Morgan Minick led off the inning with a bunt and reached on an error by the DW catcher. This was the beginning of a five-run explosion for Southland as they took advantage of two errors and a walk by the Lady Knights. With runners at first and second with nobody out, Holly McCain singled, advancing Abby Lightner to third and Alli Dent to second. Sara Beth Storey tripled, driving in Dent and McCain. Brookland Weaver then hit a sacrifice fly, scoring Storey to make the score 10-0 in favor of Southland.

In the top of the fifth inning, Youngdale retired the DW batters in order to finish the run-ruled game. Southland scored 10 runs on six hits and only committed one error. Deerfield-Windsor scored no runs on three hits and committed three errors.

With the win, Southland improves to 10-6 on the season.