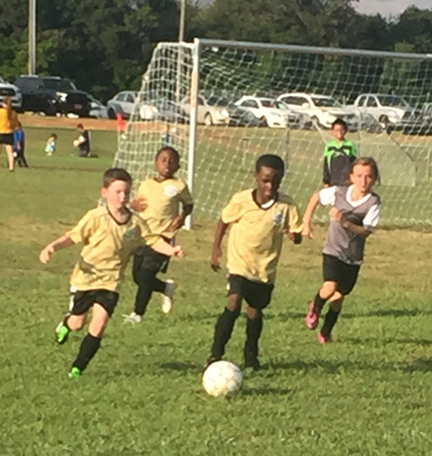 Atlanta United’s Travion King with the ball. King scored a goal in his team’s 9-0 win. Photo by Ken Gustafson

AMERICUS – Goals were plentiful and the games were exciting on Thursday, September 13, in the Sumter County Parks and Recreation soccer games played at the Miller Rush Football and Soccer Complex.

In the U10 Division (7-9 year olds), in which teams play six-on-six games, Atlanta United defeated the Schley County Wildcats 9-0. Jay Angrish scores six goals in this game. Christian Blanchard scored two, Travion King scored one and Anna Wade scored a goal for the team in gold. 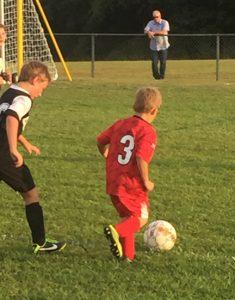 Even though his son’s team lost, Donnie Dew, who is a volunteer director for Schley County youth soccer, was very pleased with the team’s heart and that the participation rate has increased as much as it has. “I’ve been doing this for nine seasons,” Dew said. “We started with 11 kids. This year, we went from 21 kids signed up two 64 in 24 hours. We signed up 43 kids the day before the deadline. We play with heart and we want the kids to have fun. We also stress good sportsmanship.”

The second game in the U10 Division featured the Sumter County Red Bull’s against the other Schley County team: The Black Cats. The Red Bull’s won 10-0, and C.J. Perez scored several goals.

In the U7 Division, which consists of five and six-year-olds, they don’t officially keep score, even though the parents do. 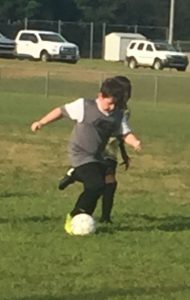 Unofficially, the game between the Sumter County Maroons and the Schley County team ended in a 2-2 draw. Zach Price, the goalkeeper for the Maroons, made a nice save in this game. 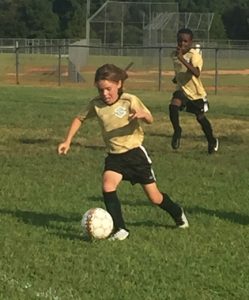 In the U13 Division, the Sumter County Galaxy defeated the Schley County team 5-0. Ricky Retana scored a hat trick (three goals) and Maddox Dukes has 2. “This is our first week of games. They have learned how to pass correctly”, Galaxy Head Coach Blake Dukes said. “They’ve also learned to rely on Alan Gonzalez, our goalkeeper. He probably had 20 shots on goal come his way. He stopped them all. We’re a really defensive-minded team. They have come a long way in two weeks.” 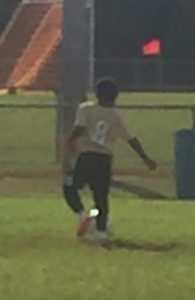 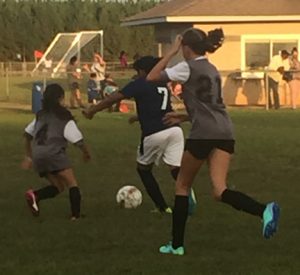 “There has been some improvement. We just have to keep working”, Whitecaps Head Coach Abraham Carillo said. “We’re here to have fun, but we’re out here trying to win. They are going to play towards that. They’ve worked hard today. They sweated it off, but we’ll sure get them next time.” 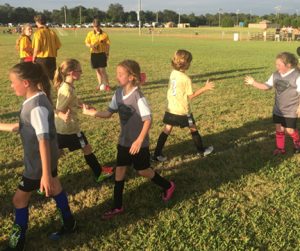 Atlanta united and the Schley County Wildcats shaking hands after their game.
Photo by Ken Gustafson

The SCPRD recreation soccer league has games every Monday and Thursday night through September and most of October at the Miller Rush Football and Soccer Complex at the SCPRD Park off of US 19.