Americus-Sumter explodes in second half to defeat Shaw 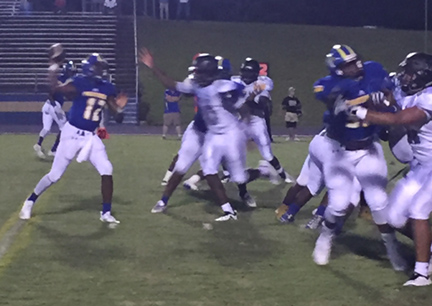 Americus-Sumter quarterback KJ Harvey is about to throw the first of his two touchdown passes to Lemario Larry. Photo by Ken Gustafson

AMERICUS – It was an exciting night at Alton Shell Stadium for several reasons. It was Sumter County Youth Football Night. All of the teams were recognized before the game. Legendary former NFL Coach and hometown hero Dan Reeves was in the house and was honored as a hometown hero. He was the honorary captain during the coin toss before the game. However, the most exciting thing to happen was the Panthers exploding offensively in the second half to defeat Region 1-AAAA opponent Shaw by the score of 21-0. 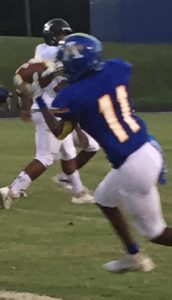 Americus-Sumter wide receiver Quevolia Willoughby catches the football on a drive by the Panthers. Photo by Ken Gustafson

Americus-Sumter Head Coach Larry Harold was pleased with the win, but not pleased with the numerous penalties committed by his team. “We’ve got to clean up those penalties,” Harold said. “We had personal foul penalties and holding penalties that killed drives. We had a slow start, but a win is a win. We’ll take it. We’re 2-0 in the region, but we have to get better. Our defense played great tonight. We had our first shutout of the year, but we have to clean some things up to get ready for Hardaway next week.” 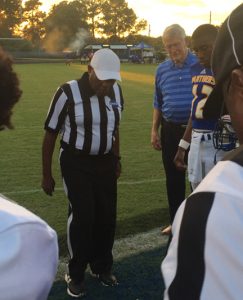 Dan Reeves (light blue shirt on right side) is the honorary captain during the coin toss before the game.
Photo by Ken Gustafson

The first quarter was all defense. Neither offense could get on the board. Halfway through the second quarter, the Panthers had the ball and were moving the offense down into Shaw territory. This was in part due to the running attack of Montrellis Wilson and Christopher Lundy. The Panthers moved the ball down to the Shaw 12-yard line. Then KJ Harvey found Lemario Larry in the end zone for a touchdown. Kevin Abarca’s PAT was good, and the Panthers led 7-0 at halftime. 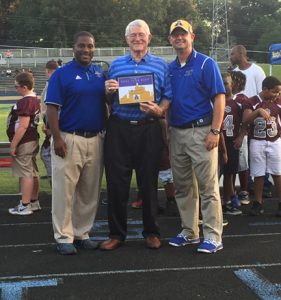 Legendary former NFL coach Dan Reeves is honored with the Hometown Hero award. To his left is ASH Principal Kimothy Hadley and to his right is ASH Athletic Director Coleman Price.
Photo by Ken Gustafson

In the second half, the Panthers steadily moved the ball down into Shaw territory. However, the Raider defense forced Americus-Sumter into a 4th down situation. It was 4th-and-3 from the Shaw 15. Harvey handed the ball off to Montrellis Wilson who cut to the outside and ran up the sideline for first-down yardage at the Shaw 5-yard line. The Panthers got the first down and it was first and goal from the 5. Running back Christian Wayman got the ball and ran it in for a touchdown. The extra point was good, and the Panthers led 14-0.

Up to this point, the Panthers had held the Raider offense in check throughout the game. Late in the third quarter, Americus-Sumter had the ball on their own 13-yard line. Harvey threw an 87-yard touchdown pass to Wilson. However, the touchdown was nullified because of a holding penalty. The third quarter ended with ASH up 14-0. 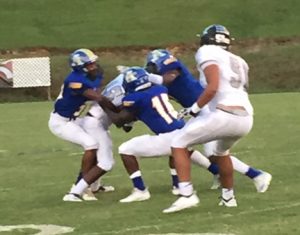 Early in the fourth quarter, the Panthers were moving the ball on the Shaw defense again. They had the ball inside the red zone. On 4th-and 1 from the Shaw 14, Harvey made a quarterback sneak. They brought in the chains for a measurement and determined that Harvey did not gain the yardage. The ball went over on downs.

However, the Panther defense stopped the Raiders on offense, forcing Shaw to punt. The Panther offense once again methodically moved the ball down the field. Then Harvey threw a long pass into the end zone to Q Willoughby, who was defended by Jaques Banks. However, defensive pass interference was called against Banks. Moving the ball further into Shaw territory. 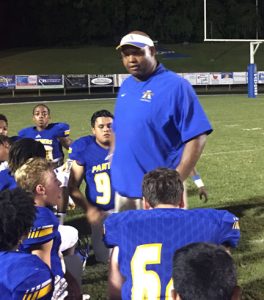 A few plays later, Harvey completed a touchdown pass to Lemario Larry for his second touchdown reception of the game. The extra point was good, and the Panthers went on to win 21-0.

The Panthers are now 2-2 overall and 2-0 in Region 1-AAAA. They will travel to Columbus next Friday, September 21, to take on another region opponent: The Hardaway Hawks. Kickoff is scheduled for 7:30 p.m.